Sonam Kapoor was at her cousin Akshay Marwah's roka ceremony along with her sister Rhea and cousins Arjun, Anshula and Shanaya 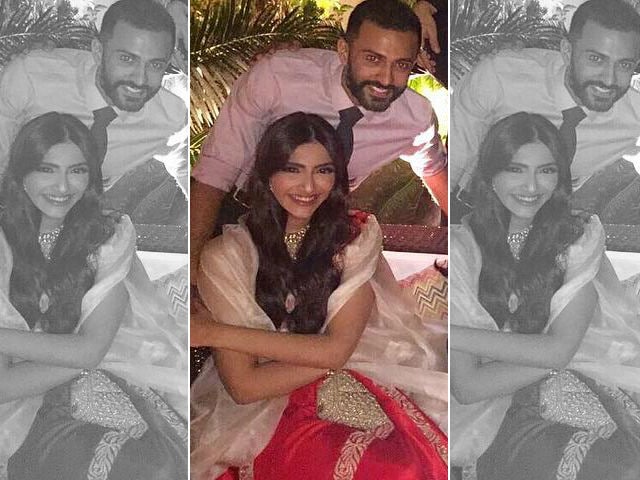 This image was posted on Instagram by Rhea Kapoor

Actress Sonam Kapoor, who is very guarded about her private life, attended a family event with her rumoured boyfriend Anand Ahuja on Sunday in New Delhi. The 31-year-old actress was at her cousin Akshay Marwah's roka ceremony along with her sister Rhea and cousins Arjun, Anshula and Shanaya.
In one of the few pictures shared by the Kapoor cousins, we spotted Anand and couldn't resist sharing it:

That's Anand, next to Sonam.
Sonam and Anand were earlier spotted at Akshay Kumar's party for Will Smith in August.


You damn right it's limited! #FreshPriceTuesdays with the real Fresh Prince! #latergram #damnrightitslimited

According to a Mumbai Mirror report, sources close to Sonam, 31, say that she is been 'in love' with Anand Ahuja for almost two years. The report also states that Anand's family has an apparel business and he has launched his own label - Bhane.
Meanwhile, here are some more pictures from the roka ceremony. Both Sonam and Rhea wore saris by Anamika Khanna.

Akshay, a filmmaker, is Mohit Marwah's brother and the nephew of actor Anil Kapoor and producer Boney Kapoor. Akshay's getting married to Delhi-based Aashita.
Sonam Kapoor will be next seen in sister Rhea's film Veere Di Wedding along with Kareena Kapoor Khan and Swara Bhaskar.