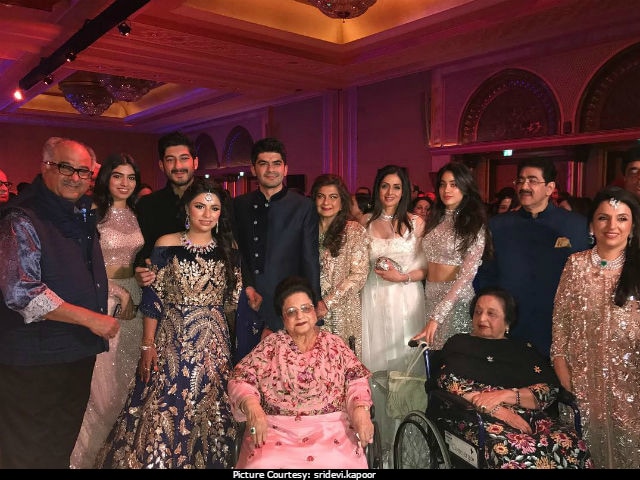 Sridevi attended a wedding at Abu Dhabi with daughters sridevi.kapoor

Actress Sridevi, daughters Jhanvi and Khushi, their cousins Sonam Kapoor and Arjun Kapoor and the rest of the family attended a big fat family wedding in Abu Dhabi, filling social media with pictures, each more stunning than the other. The groom was Kapoor cousin Akshay Marwah, brother of actor Mohit Marwah and son of Sandeep Marwah, who runs a film studio in Delhi. Akshay's mother Reena Kapoor is the sister of Sonam's father Anil and Sridevi's husband Boney Kapoor. Akshay Marwah, a director, married Aashita Relan on February 27 in a lavish wedding ceremony. Like most of the times, Sridevi and her daughters Jhanvi, 19, and Khushi, 16, wore Manish Malhotra couture and the designer happily shared pictures of his muses on Instagram:

The Kapoors are now back in Mumbai. Sridevi, Boney Kapoor and their daughters were photographed at the Mumbai airport on Tuesday. 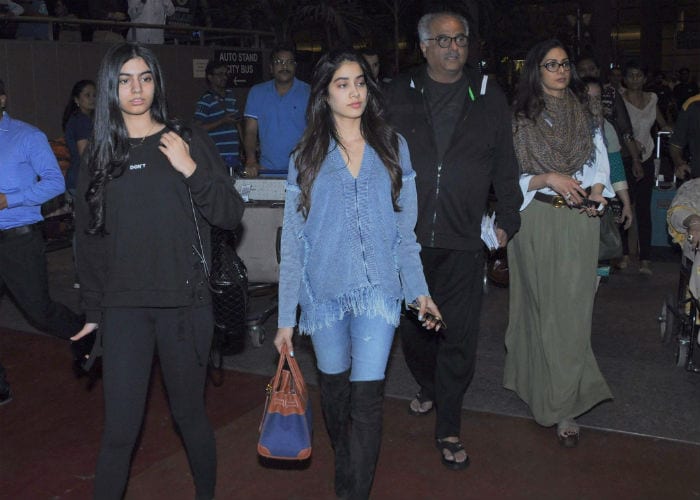 Sridevi and Boney Kapoor photographed with Jhanvi and Khushi in Mumbai

Meanwhile, social media is flooded with pictures from the wedding celebrations. For instance, this picture of Sridevi, husband Boney Kapoor and their daughters made the Internet very happy:

Sridevi's outfit, an embellished red skirt with a white shirt, was made by designer Manish Malhotra.

Sonam Kapoor wore favourite designer Anamika Khanna to the wedding and related ceremonies. She posted photos of herself, one with sister Rhea, both looking very glam, and another with cousin Arjun:

The June siblings !!! @sonamkapoor and me at the #akmash mehendi let the madness begin !!!

Arjun Kapoor provided a photo of himself on the dance floor and one of the groom in the baraat:


Dance like no one s watching !!! #akmash was a blast... old friends new memories & the big fat Punjabi wedding..One of my brothers got married today I wonder which one of us is next ?????? Full and only credit to @rimosky for this amazing picture !!!

Sridevi posted a photo welcoming the bride into the family:


Welcome to the family Aashita

It was three-day wedding with mehendi and sangeet ceremonies. Early family arrivals in Abu Dhabi included Sanjay Kapoor and wife Maheep, with Sonam and Rhea. They were later joined by Anil Kapoor, Arjun, Sonam's brother Harshvardhan, mother Sunita, Boney Kapoor, Sridevi, Jhanvi and Khushi.
Sonam will next be seen in the Rhea Kapoor-directed Veere Di Weeding, also starring Kareena Kapoor and Swara Bhaskar. Actor Arjun Kapoor is currently shooting Ekta Kapoor's Half Girlfriend, which will hit theatres on May 19.
Sridevi was last seen in the Tamil film Puli but her elder daughter Jhanvi is all set to make her Bollywood debut in a film to be produced by Karan Johar.