Sridevi: I am a big fan of Meryl Streep 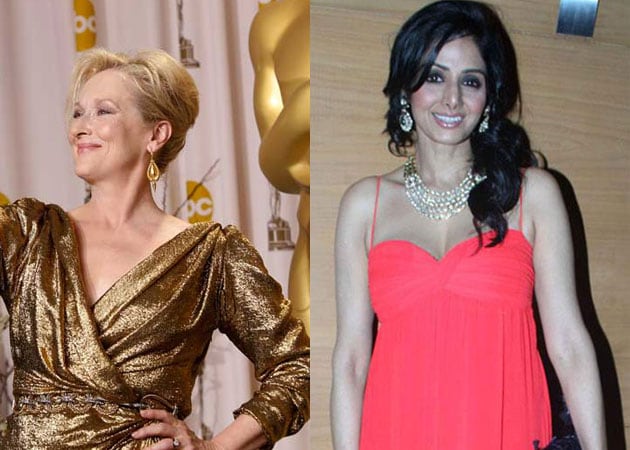 Sridevi: I am a big fan of Meryl Streep

After making a successful comeback with English Vinglish, Bollywood diva Sridevi wishes to have a career like multiple Oscar-winning actress Meryl Streep.

After making a successful comeback with English Vinglish, Bollywood diva Sridevi wishes to have a career like multiple Oscar-winning actress Meryl Streep.
Sridevi, 49, says her movie choices are instinctive. "I am a big fan of Meryl Streep. I have never planned my career. I chose those films with which I could relate myself. But if given a chance, I would love to do the kind of roles Meryl Streep has done," she said at the India Today Woman Summit here.
Sridevi started her career as a child artiste at the age of four and starred in Telugu, Tamil, Hindi and Kannada films before leaving films for marriage and family. The actress believes that the industry has gone through a sea change as technology and script have become more mature.
"Things are changing now. Audience, technology and script have become matured. Audience want to watch heroin-oriented films and even writers are writing scripts for women. I am very happy to see this change," she said.
In Bollywood, Sridevi has acted with a bevy of directors be it Yash Chopra, Satish Kaushik, Raj Kanwar or newcomer Gauri Shinde. But the actress says she misses working with her Mr India helmer Shekhar Kapur.
"I am lucky to have work with many filmmakers but the one director whom I miss working with is Shekhar Kapur. He is a brilliant director and takes out the best from nothing," she said.
Having married to producer Boney Kapoor for 17 years, Sridevi is a doting mother to two daughters - Jhanvi and Khushi.
"Being a mother is the most beautiful thing happened to me. I am enjoying every bit of it. My husband is very supportive. I lead a very normal life. I even go to fish market to get fish for my daughters," she added.