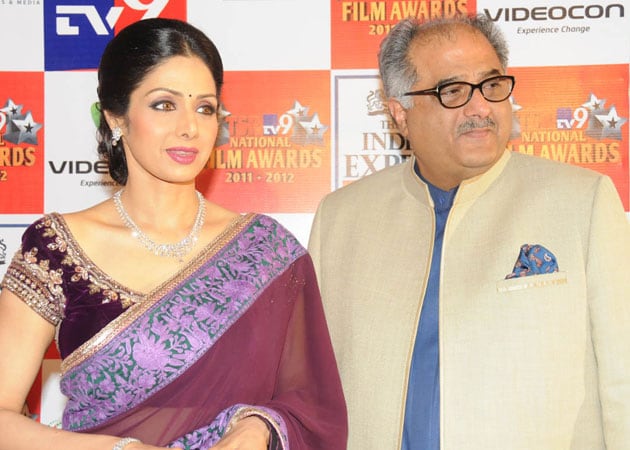 Boney Kapoor was all praises for his actress wife Sridevi

Boney Kapoor his wife-cum-actor Sridevi truly deserved to be honored with the title "Empress of Indian cinema."

Producer Boney Kapoor said on Saturday his wife-cum-actor Sridevi truly deserves to be honored with the title "Empress of Indian cinema", adding nobody else in the industry deserves the award more than her.
"I think she truly deserves the award. She is most definitely an empress of Indian cinema. I don't think nobody else deserves the award more than her. I'm extremely happy for her," said Boney Kapoor, speaking at the TSR-TV9 national film awards.
Kapoor himself won the "Star Producer of the Millennium" award. "I'm extremely grateful for this award. It's definitely an honor to be bestowed upon with such an award and I'm extremely happy about it," said Sridevi.
Instituted by T. Subbarami Reddy (TSR) in collaboration with TV9, the TSR-TV9 national film awards were honoring artists from Telugu industry for the year 2011-12.
Members from Tamil, Kannada and Malayalam industries along with Bollywood were also honored under special jury awards. All awardees were handpicked by a committee comprising of veteran actor Akkineni Nageswara Rao, lyricist C. Narayana Reddy, legendary producer D. Rama Naidu, singer P. Suseela, actor-politician Jayasudha and Shobana Kamineni, director of Apollo Hospitals Group.