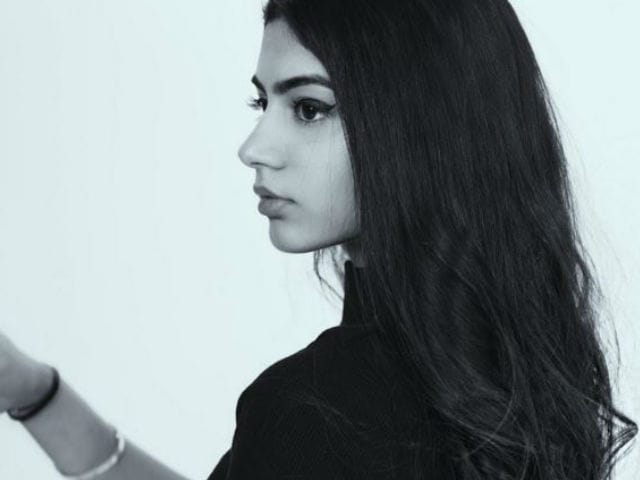 This image was posted on Instagram by Khushi Kapoor

Actress Sridevi's teenaged daughter Khushi has responded to rude Instagram comments about her appearance with a lengthy post addressing body-shaming. "There is only one of you, embrace your beauty, and don't rain on my parade when I'm confident enough to embrace mine," Khushi wrote

Actress Sridevi's teenaged daughter Khushi has responded to rude Instagram comments about her appearance with a lengthy post addressing body-shaming. Khushi, 15, is the younger daughter of Sridevi and her producer-husband Boney Kapoor.
In her post, Khushi explains she posts pictures of herself because it makes her "feel good and confident," writing that "I don't care if you think my stomach pops out or if I don't fit into your idea of beautiful."
"There is only one of you, embrace your beauty, and don't rain on my parade when I'm confident enough to embrace mine," writes Khushi, encouraging commenters to "be kind to one another."
Read Khushi's entire post here:


I post my pictures because I feel good and confident. I put out these pictures not because I want to show off or try to be anyone or anything else. I have my own sense of style and my own way to think and me putting out a picture that's accessible to so many people is taken more of an opportunity to judge me or my looks, clothes or anything else. I put something out there because it's something I feel good about, everyone is entitled to have their own opinion but putting someone else down because of it is not making you any better of a person. Please think twice before you decide to comment something rude or offensive, it's not a joke. It's sad how in this day and age where feminism is finally getting the attention it deserves, girls still feel the need to tear each other down and indulge in body shaming. I don't care if you think my stomach pops out or if I don't fit into your idea of beautiful, but for your own conscience please realize that having such narrow minded opinions of people makes you an ugly person inside. I truly believe everyone is beautiful in their own way, why can't we all celebrate that and encourage each other. There is only one of you, embrace your beauty, and don't rain on my parade when I'm confident enough to embrace mine. I hope that whatever it is that frustrates you enough to be so cruel will one day go away, because some people might actually take your snide remarks seriously, and I know from experience it can hurt. Let's be kind to one another, love always x

Khushi Kapoor's note follows that of another star kid, actress Pooja Bedi's 18-year-old daughter Aalia Ebrahim, who wrote a scathing response to disrespectful Instagram comments that described her as "porn ready." In a blog piece titled 'I am more than my breasts,' she wrote: "If my cleavage is visible, it does not mean I am giving consent, it does not mean I am "asking for it." I am more than my breasts and it is unfair to let them define me. I am an eighteen year old Indian girl and that does not take away the fact that I am allowed to dress the way I please... I am not my breasts and it is unfair to sexualise me and base my morals, my achievements and my goals and ambitions on my breasts... If I choose to wear a bikini, it is my choice and it is about time we grow up and let individuals be their own people without fearing what society will say. My breasts do not take away from all the social service I have done, my breasts do not take away my numerous academic and extracurricular accomplishments and awards, my breasts do not take away my strong academic position."
Aalia and Khushi might still be too young to discover that you can never please everyone, no matter what. Actress Parineeti Chopra, 27, came by this knowledge the hard way after she spent nine months re-inventing herself. Once criticized widely for her failure to be slender, Parineeti debuted a new, toned body on social media last month, posting pictures of her fabulously fit new self. The applause, resounding though it was, could not drown out the small but insistent chorus of comments from those who saw an opportunity to be either cruel or funny. Parineeti told news agency PTI, "That (criticism) is absolutely bizarre. Being thin is a different thing. I wanted to have better stamina and control over my body. I am not endorsing being thin, I am endorsing being your fittest self." (Also Read: Not Endorsing Being Thin, Says Parineeti Chopra)
In 2014, Parineeti's colleague Sonakshi Sinha, a favourite target of fat-shamers, posted an acerbic message on Instagram:


To all those who keep commenting on my weight, whether its a full picture, or a close up where you cant see jack. Take a good look at this picture. Now get this: 1) this aint ever gonna be me. 2) get over it. 3) i wish u could see which finger i hold up for shallow and idiotic people like yourself.

Abroad, several young female celebrities have used social media to call out body-shamers. Modern Family actress Ariel Winter and singer Ariana Grande united against a troll who said he would pick the former over the latter because "curves are sexy sticks aren't." On Instagram, 22-year-old Ariana reminded everyone to "celebrate yourself, celebrate others." Ariel, just 17, backed her up on Twitter, saying, "Women should empower one another." (Also Read: Ariana Grande, Ariel Winter Unite Against Body-Shaming Troll)
Supermodel Gigi Hadid, 20, also posted a note on Instagram last year in which she wrote, "I represent a body image that wasn't accepted in high-fashion before, and I'm very lucky to be supported by designers, stylists and editors... Your mean comments don't make me want to change my body."