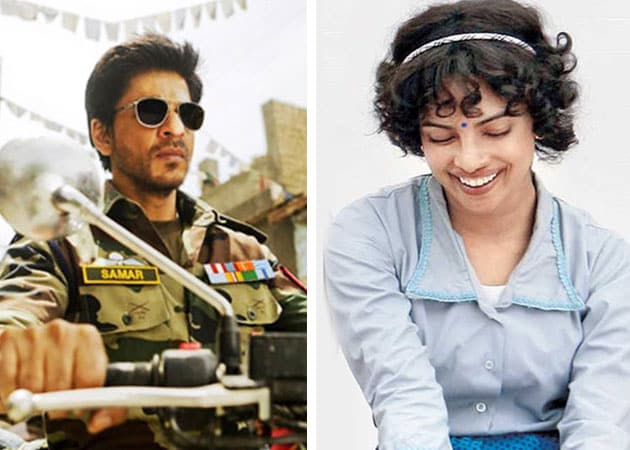 Surprisingly, Ranbir Kapoor, who has won almost all the Best Actor awards this year for his performance in Barfi!, was completely overlooked at the awards night that was held in Mumbai on January 26, 2013. Ranbir aside, almost everyone who is anyone in Bollywood scored a prize, with the notable exception of Salman Khan, who had two blockbusters last year with Ek Tha Tiger and Dabangg 2.
Sridevi shared Best Actress (Drama) for English Vinglish with Priyanka. Best Actor (Drama) went to Hrithik Roshan for his performance in Agneepath. Sanjay Dutt was named the Best Actor in Negative Role for Agneepath.
Vidya Balan continued her winning streak with the award for Best Actress (Thriller / Action) for Kahaani. Akshay Kumar was named the Best Actor in the same category for Rowdy Rathore and Khiladi 786.
Anushka Sharma and Abhishek Bachchan took home Best Actress and Actor (Comedy/Romance) for Jab Tak Hai Jaan and Bol Bachchan respectively. Amitabh Bachchan received the Star of the Century award.
Manoj Bajpayee and Ayushmann Khurrana shared the Best Actor trophy for Gangs Of Wasseypur and Vicky Donor repectively. Director Farah Khan scooped up a surprise Best Actress win for her on-screen debut in Shirin Farhad Ki Toh Nikal Padi.
Ishaqzaade stars Arjun Kapoor and Parineeti Chopra were chosen Superstars of Tomorrow. The Best Debut award was shared by Varun Dhawan and Sidharth Malhotra for Student Of The Year. Gauri Shinde was named Best Debut Director for English Vinglish.
Shoojit Sircar won the award for Best Director for Vicky Donor, which was also adjudged the Best Film at the ceremony. However, and confusingly, Film Of The Year went to Barfi!.
And last but not the least, Bipasha Basu was named the Best Style Icon Of The Year.
Celebrities added glitz and glamour as they walked the red carpet in style.
Sonakshi Sinha wore a blue off-shoulder Marchesa dress and Anushka Sharma was chic in black Armani.
Vidya Balan was yet again seen in a sari by her favourite designer Sabyasachi Mukherjee. Style Icon Of The Year winner Bipasha Basu looked glamorous in a Gucci dress and a new hairdo.