Sridevi and Jhanvi: Sridevi almost always ensures that she shares pictures with her daughters - Jhanvi and Khushi - whenever she steps out with them 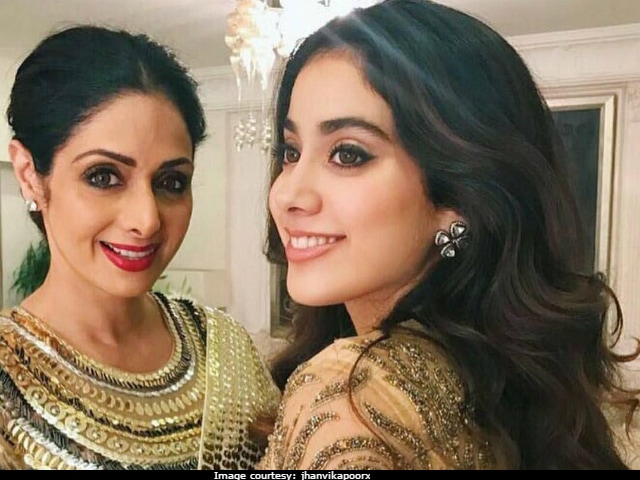 Sridevi and Jhanvi Kapoor took the gown game a notch higher as both mother and daughter posed in printed ensembles in the pictures they shared on social media. Sridevi almost always ensures that she shares pictures with her daughters - Jhanvi and Khushi - whenever she steps out with them. Jhanvi is prepping for Bollywood and accompanies her mother to Bollywood parties and film screenings more frequently than her sister. We cannot really say where was Sridevi and Jhanvi headed on Friday but they surely stole the limelight at the venue. Sridevi was elegant in a heavily-worked sheer skirt and full-sleeve blouse while Jhanvi opted for a multi-coloured floor-length gown - half shimmer and half sheer.
Jhanvi could have made a fashion faux pas but she scored full marks for the poise and confidence she pulled off the look with. Jhanvi kept it simple with zero accessories and a sleek hair do.

Earlier in January, Sridevi and Jhanvi were spotted looking uber-stylish at a party hosted by designer Manish Malhotra. Sridevi and Jhanvi were partly colour-coordinated at the party. Sridevi opted for a classy set of white separates and brown clutch while Jhanvi added a splash of colour with the blue trousers, which she teamed with a choker-style blouse.

A picture of Jhanvi and Sridevi went viral last year after Manish shared it on social media in October. Sridevi was dressed in a white handcrafted gown while Jhanvi wore silk lehenga with an off-shoulder shimmer blouse.

Jhanvi Kapoor is almost a regular at Bollywood parties now and the grapevine has it that her maiden film will be with Karan Johar. It is also being reported that it could be the Hindi remake of Marathi movie Sairat. However, this is what Jhanvi's filmmaker father Boney Kapoor said in an interview with DNA: "Yes, Karan has been talking to us about a film for Jhanvi and we've given consent. But we don't know which project it would be. Since Karan has recently acquired the remake rights of Sairat it is being presumed that our daughter would be launched in this project."
Sridevi made her comeback in Bollywood with 2012's English Vinglish directed by Gauri Shinde. Her upcoming film is Mom which is directed by Ravi Udyawar and produced by her husband Boney Kapoor.