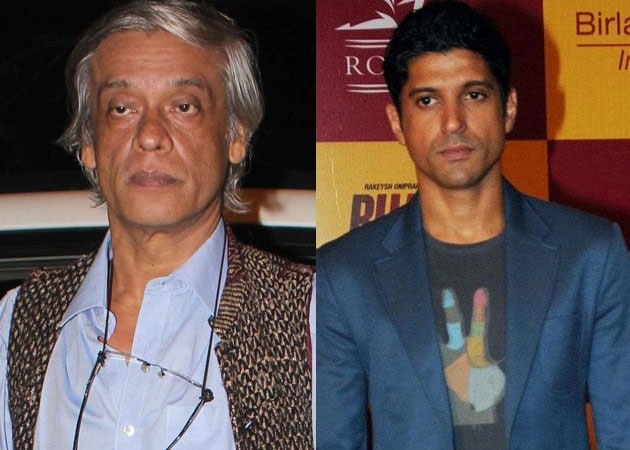 Farhan Akhtar has found a fan in filmmaker Sudhir Mishra, who wants to work with him in the future.

After delivering a brilliant performance in Bhaag Milkha Bhaag, director-turned-actor Farhan Akhtar has found a fan in filmmaker Sudhir Mishra, who wants to work with him in the future.
Mishra said that contrary to reports Farhan is not a part of his film Dhruv but he is planning to offer another film to the Dil Chahta Hai director.
"I am going to do Dhruv but it will not star Farhan. I am planning another film with Farhan. I have not narrated the story to him yet. But I want to cast him. I feel he is an outstanding actor.
"I haven't seen a performance of such integrity like the one he did in Bhaag Milkha Bhaag. I am so glad that he took the plunge in acting," Mishra said in an interview on the sidelines of IFFI.
Mishra, who last directed Inkaar, will soon begin work on Pehle Aap Janaab, which was earlier titled Mehrunissa. When asked why he decided to change the title even before the commencement of shooting, the filmmaker said, "The earlier title was sounding like a story of a courtesan and a period film, which it is not. It is a comedy in the best sense of the word and is about love and life. Hence, I decided to change the title."
The film stars Bollywood megastar Amitabh Bachchan, Rishi Kapoor and Mishra's favourite lady Chitrangada Singh. The Hazaaron Khwaishein Aisi director said he is looking forward to shoot with both Rishi and Big B.
"I feel it is the right script and that is why they decided to be a part of it. It is about what happens when something that you have yearned for in childhood and what you missed comes back to your life.
"It is a comedy between Rishi Kapoor and Amitabh Bachchan, who are the main protagonists of the film. It is a story about those two characters," Mishra said.
Mishra said the shoot of Pehle Aap Janaab has been rescheduled and he will decide the final date in a week's time. The film will be entirely shot in Lucknow.