"My little brother is not so little anymore! So happy he has found his soul mate," Sunny Leone wrote on Instagram 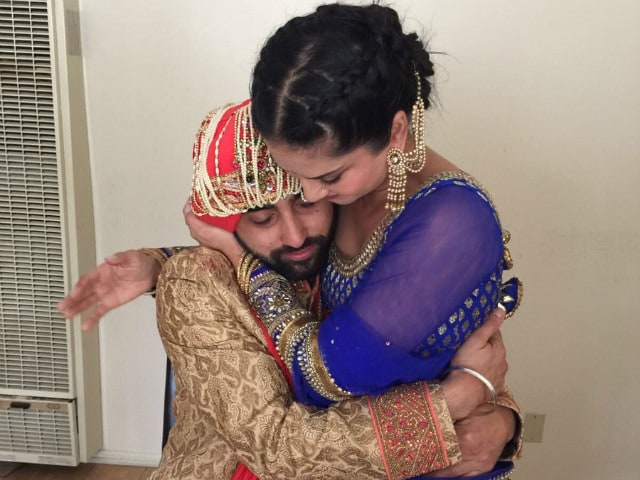 'My little brother is not so little anymore,' Sunny Leone wrote on Instagram

Actress Sunny Leone was the most searched Indian of 2015, she made it to the list of BBC's 100 most influential women, will feature in Shah Rukh Khan's upcoming Raees in a dance number, and might also share screen space with actor Aamir Khan in the future. But she was just like any other typical Punjabi kudi at her brother, Chef Sundeep Vohra's wedding ceremony. Sunny's husband Daniel Weber was by the groom's family for the festivities. Sunny shared pictures of the Gurudwara-wedding on social media and the internet just cannot have enough of it. Well, we don't blame them. Sunny looked gorgeous in traditional kurti-patiyala, stealing the show in a combination of blue and gold. Daniel opted for a black velvet sherwani. Sundeep married fashion stylist Karishma Naidu.
Sunny helped her brother prep for his big day and wrote on Instagram: "My little brother is not so little anymore! So happy he has found his soul mate!"

My little brother @chefsundeep not so little anymore! So happy he has found his soul mate!

Last prayers before @chefsundeep got married!

Here's Sunny with her in-laws, co-ordinated in blue:

On Twitter, she shared more pictures from before and after the Sikh-style wedding ceremony:

The bride and groom complimented each other in gold and red. Sunny can also be seen receiving blessings at the Gurudwara with folded hands and greeting the newly-weds.

Sundeep and Karishma had another wedding in accordance with South Indian rituals:


Love these photos @DanielWeber99@hitendra1480@chefsundeep last prayer to God and my parents before the Gurudwara :) pic.twitter.com/8VlIdiHiWP

Wedding festivities kicked off with a very happening party, at which the limelight followed Sunny as she opted for a bold cut-out ensemble in black and let her hair down with Daniel. Party like Sunny!