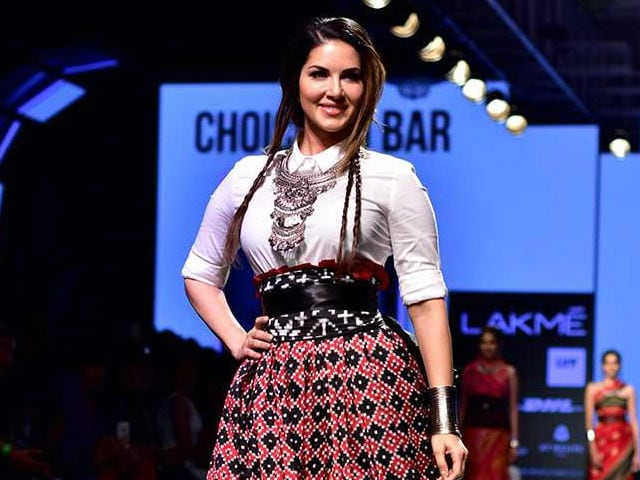 Sunny Leone photographed during the Lakme Fashion Week in Mumbai.

Sunny Leone hoped to work with Shah Rukh Khan since the beginning of her Bollywood journey and the actress recently shot a song in Raees with the superstar. Sunny says she found it difficult to control her emotions.
Sunny will be seen shaking a leg with the Dilwale actor in the reprise version of the 1980 chartbuster Laila O Laila in the film.
The Mastizaade actress feels proud to have worked with Shah Rukh, as she had wished for the opportunity "every single day".
"Working with Shah Rukh was unbelievable, it was a dream come true. When you wish for something every single day and then you get a chance, just the offer to work with somebody like him, it was a very proud moment for me," she told PTI in an exclusive interview. (Also Read: Sunny Leone Pinched Herself to Believe She's on Shah Rukh's Raees Set)
Even though the 34-year-old actress has made a mark for herself in Bollywood with several films to her credit, she got very emotional when she saw herself with Shah Rukh in one frame.
"I was the happiest ever. To see myself and Shah Rukh on the screen, in one frame, that was the first time I saw, the first shot, it was very emotional for me. I was like 'I have make-up on, control your emotions'. I was constantly saying, 'Oh God! My first shot with him, thank you'."
Usually bold and confident in her demeanour, Sunny, was a bundle of nerves when she met the 50-year-old actor on the movie's set. The Ragini MMS 2 star said that she behaved like a "dork" in front of him. (Also Read: Shah Rukh Has a Special Song With Sunny Leone in Raees. Details Here)
"He is very nice, respectful, and professional. I am such a dork, I get shy. I am like that person who doesn't know what to talk when that person is standing in front of you. You admire them, look upto them and you think 'they have accomplished so much', and then they're in front of you and you just don't know what to say," the actress said.