The film has found fans amongst the film industry and the reason is none other than Sushant, who has been receiving praise from many notable personalities on Twitter 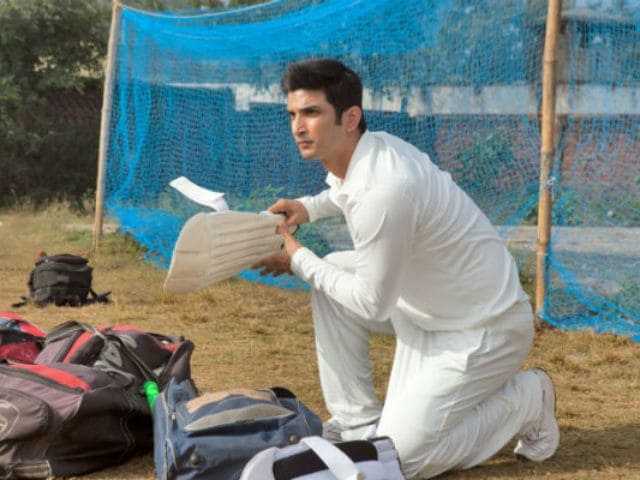 M S Dhoni: The Untold Story has one of the widest releases for any Hindi film, and has been further dubbed in Tamil, Telugu and Marathi. Based on the life of Indian skipper MS Dhoni, the film, which sees actor Sushant Singh Rajput portray the titular character, has a lot riding on it.
It seems, however, that the film has found fans amongst the film industry and the reason is none other than Sushant, who has been receiving praise from many notable personalities.
Tamil superstar Suriya Sivakumar, who is busy shooting for Singam 3 caught a show of the biopic and was 'spellbound' by Sushant's performance:


Just saw #MSDhoniTheUntoldStory Sushant or Dhoni who actually are you.. @itsSSR Spellbound by your performance!!

But he wasn't the only one who couldn't spot a difference Sushant and Dhoni himself. Actress Kriti Sanon, filmmakers Milap Zaveri and Shirish Kunder, screenwriter Niranjan Iyengar echoed the sentiment:


@itsSSR you are a true performer. U were Dhoni for me in every frame of #MSDhoni . Such expressive eyes..Killed it n how!!

Take a bow @itsSSR U made me believe YOU were @msdhoni and that's hell of an achievement! Found myself applauding for him as well as you!

An actor playing a sportsman never looks convincing. That's why I loved watching @msdhoni play himself. @itsSSR, which role did you play?


@itsSSR you are fantasticccccc bro.. made an immortal man even more immortal... hats off and love you bro.a thousand hugsloveddddd the film.

Telugu star Nithiin urged everyone to watch the film:

Sushant's Kai Po Che gang was behind him:


Congratulatuons @itsSSR on hitting it out of the stadium. So proud of you brother. What a splendid job in #DhoniUntoldStory

Its A @itsSSR show all the way.. fabulous performance..immensely proud of u my boy #MSDhoniTheUntoldStory#Dhoni

Hero stars Sooraj Pancholi and Athiya Shetty were all praises:


#DHONI what a film! Was blown away by your performance @itsSSR I don't think any1 cud have done what uve done bro! Too good #NeerajPandey

Loved #DhoniUntoldStory. Every character what so perfectly adapted and portrayed.@itsSSR you told the story so effortlessly, u were amazing.


So enthralled by your @msdhoni, @itsSSR! Honest, sophisticated, immaculate work. #MSDhoniTheUntoldStory is a dreamer's delight ! #TrueHero

This @itsSSR is such a perfectionist. From each expression to the helicopter shot. Well played bro! Absolutely loved #DhoniUntoldStory

#MSDhoniTheUntoldStory INSPIRES BEYOND! @itsSSR you my friend are brilliant! @msdhoni you r an inspiration. Hats off #NeerajPandey & crew.

@itsSSR your performance is so good in every frame I saw @msdhoni and not you! Emotions,cricket,romance you've excelled in all! Hats off

Now I want to see the untold story of @itsSSR 's prep to become Dhoni. What an incredible portrayal. Really inspiring!

Absolutely Loved #MSDhoni such a terrific performance by @itsSSR Bhaii you have killed it!! @msdhoni Such an Inspirational Journey!!


#MSDhoniTheUntoldStory is worthy.....This man @msdhoni is an inspiration to billions. @itsSSR you've killed it !!!

And there was love from home:


@itsSSR i have no words for you. Live your moment my dhoni time to relax and see your hardwork getting appreciated

@itsSSR your performance in #MSDhoniTheUntoldStory is beyond words. It is flawless. One of best. Every character is pure. I am very good.