Sussanne Khan posted a picture with Hrehaan and Hridhaan, where the trio is seen enjoying a cruise ride 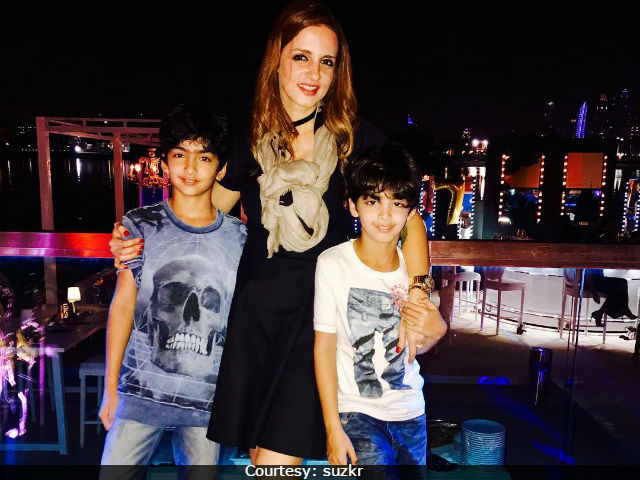 Sussanne Khan photographed with her sons in Dubai (Courtesy: suzkr )

Hrithik Roshan's ex-wife Sussanne Khan was out on a holiday with sons Hrehaan and Hridhaan last week. The doting mother posted an adorable picture on Instagram with her sons on a cruise and wrote, "My cubs." Sussanne was also accompanied by friend and socialite Anu Dewan. Hrithik and Sussanne, who married in 2000, got divorced after 14 years of marriage. However, the duo have remained best of friends and have been quite vocal about their relationship. Hrithik and Sussanne rang in the New Year with Hrehaan and Hridhaan in Dubai. The actor also went for a mini-vacation to Swiss Alps with his sons before going to Dubai. Here are some pictures from Sussanne's holiday to an undisclosed location:

This sunset a boat, two besties.

Hrehaan, Hrithik and Sussanne's elder son, recently celebrated his 11th birthday. Sussanne, 38, an interior designer by profession shared a collage of his son's pictures also featuring Hrithik.
Check out these pictures of the Roshans in Dubai and Switzerland:

Hrithik and Sussanne often accompany each other on dinners, parties and film screenings.
In an interview to news agency IANS, the 42-year-old actor said that Sussanne's opinion still matters a lot to him while he still believes in love, he won't give marriage another chance. Hrithik had said that Sussanne decided to walk out of the marriage and hence it is his greatest tribute to love while Sussane said that the separation was their "own individual choices".
Hrithik Roshan was last seen in Kaabil, directed by his father Rakesh Roshan. The film also starred Yami Gautam and brothers Ronit Roy and Rohit Roy. Hrithik and Yami played the role of a visually-impaired couple. He is expected to soon start shooting for Krrish 4.