Swara Bhaskar On Anaarkali Of Aarah: I Feel Both Vindicated And Blessed 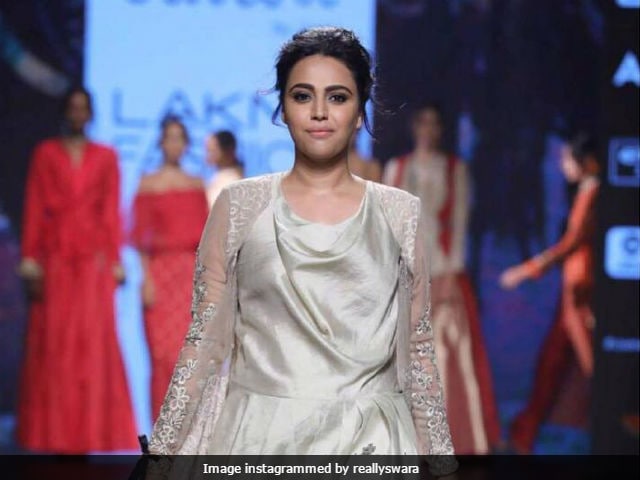 Actress Swara Bhaskar, who was last seen in Avinash Das' film Anaarkali Of Aarah, told news agency IANS that portraying the unapologetic nature of her character in the film was not very challenging. The 28-year-old actress, whose performance in the film has won a lot of appreciation, in an interview to IANS said: "I must confess that I'm quite overwhelmed. Happily overwhelmed but still overwhelmed. I had a lot of faith in the story, in Anarkali's journey and in the intention and spirit with which we made the film. I was hopeful that audiences will connect with the tale but I didn't expect this level of praise and such accolades. I feel both vindicated and blessed."
In the film, Swara Bhaskar portrays the role of an erotic singer who hails from Aarah in Bihar. Speaking about her character in the film, the Raanjhanaa actress told IANS: "Honestly, the unapologetic nature of Anaarkali was not that difficult, because that's how I feel as a woman about my own body. Being unapologetic about my body, my sexuality, my life's decisions is a political belief that as a feminist I strongly espouse. What was difficult for me and my real challenge was to preserve and express the fact that however feisty Anaarkali may seem, she is still vulnerable. Because ultimately she is a woman and a woman considered not worthy of societal respect in an obviously male-centric patriarchal world. So keeping that vulnerability of Anaarkali alive was my real challenge."
When questioned about her dance performance on racy, uninhibited numbers in the film, Swara Bhaskar told IANS: "The difficult part was not so much the raunchiness of the steps as just the live dancing. I've never done a proper Bollywood dance number. And even though I've trained in Bharatanatyam, Bollywood dancing as a form is totally different. I think credit should actually go to Shabina Khan for being able to keep the choreography rustic and sensual and yet not vulgar. I think credit also goes to my dance guru Padma Shri Leela Samsonji, whose rigorous training perhaps enabled me to perform raunchy, bawdy and fairly overtly sensual choreography without it being cringe-worthy."
She added: "Yes, while shooting sometimes the challenge became the all-male crowd, local to Amroha (where we shot), who I think began to enjoy the shoot as if it were a real show and passed those kinds of comments -- (smiles) some of those comments were pretty vulgar and offensive but I reacted like Anaarkali would. I believe shedding inhibitions is step 1 for any actor to get into any character, so that, I guess I did as part of my great faith in this script and this part."
Anaarkali Of Aarah highlights that irrespective of a woman's profession, clothes or circumstances, a no always means no. "Absolutely. This was one of my non-negotiable requests to my director Avinash Das when he was writing. We were certain that there will be no doubt about our intention and message in this film, that it doesn't matter what the woman does, what her character is, loose or slutty or whatever. She may be a prostitute, but even then consent is paramount," Swara Bhaskar told IANS.
The Tanu Weds Manu Returns actress added: "I think our bravest move was to make Anaarkali actually characterless or loose from the point of view of a middle class morality. We offer no explanation, apology or justification for the fact that she may have casual sex -- but on her own terms. That makes the whole question of consent totally non-negotiable. I think that is our greatest victory in this film."
Swara Bhaskar made her acting debut with the 2009 film Madholal Keep Walking. Speaking about her journey in the industry, spanning nine years, the Nil Battey Sannata actress told IANS: "See as an actor, and moreover an outsider with no Godfather within the industry, I don't have a whole lot of control on what kind of roles are offered to me. But I can control what I choose. And I like to choose tough roles that I haven't done before and roles that make me grow as an actor by challenging me. It's been a pretty wholesome journey. Tough and disappointing in parts but also very fulfilling in parts, so a pretty complete experience of Navarasa in that sense."
Swara Bhaskar will next be seen in Shashank Ghosh's Veere Di Wedding co-starring Sonam Kapoor and Kareena Kapoor.
(With IANS inputs)