Swara Bhaskar said: "I thought I would become a popular actor like him" 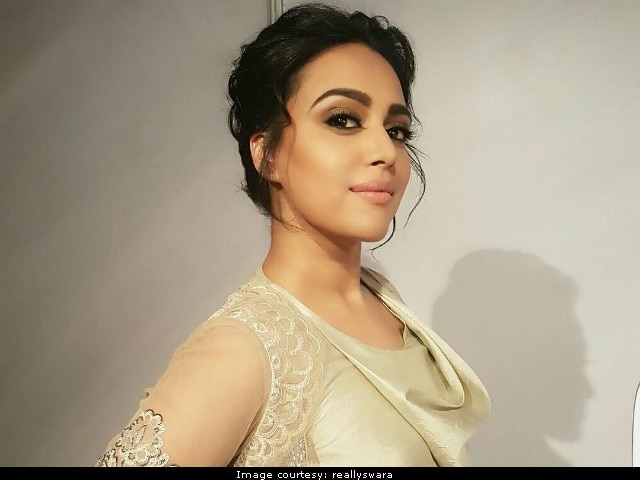 Actress Swara Bhaskar said that she wanted to be an actor equivalent to the stature of Bollywood superstars like Salman Khan and Aamir Khan, particularly that of Shah Rukh Khan, reported news agency IANS. "I thought I would become a popular actor like him," the Prem Ratan Dhan Payo actress was quoted by PTI as saying. Swara Bhaskar's breakthrough role in Bollywood was in 2010's Guzaarish, co-starring Hrithik Roshan and Aishwarya Rai. Swara Bhaskar has also starred in films like Tanu Weds Manu, Machhli Jal Ki Rani Hai and Aurangzeb. However, she is best known for playing the role of Bindiya in Dhanush's Raanjhanaa and Kangana Ranaut's childhood friend in Tanu Weds Manu Returns.
The 28-year-old actress referred to the three Bollywood Khans, and said that the difficult part is to retain stardom, if achieved. "I wanted to be like Shah Rukh Khan, and not a Bollywood heroine. I thought I would become a popular actor like him. An actor can become a star, but to retain that position like SRK, Salman (Khan) or Aamir (Khan) for 25 years is difficult," Swara said, reported IANS.
When asked about the hurdles she had to face during her journey in Bollywood, Swara opened up about the "most challenging" bit. "Those depend on your journey. Those who come without any reference are tagged as an outsider, like me. The most challenging part for them is to make an identity in the crowd," IANS reported Swara as saying. The actress also added: "However, the positive side is that the industry always recognises good work," reported IANS.
Swara Bhaskar has received Filmfare Nominations in the Supporting Actress category her roles in Raanjhanaa and Tanu Weds Manu. Last seen in Nil Battey Sannata, Swara is awaiting the release of Anarkali Of Arrah, scheduled for March 24.
(With inputs from IANS)