Swara Bhaskar: Sonam Kapoor Is A Better Friend to Me Than I Am To Her

Swara Bhaskar, who first met Sonam Kapoor on the sets of Raanjhaana, said that the Khoobsurat actress is a 'tremendous person' and has always supported her 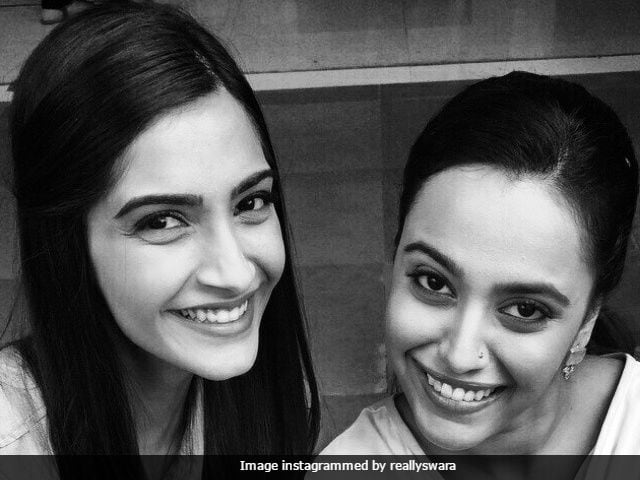 Swara and Sonam will next be seen in Veere Di Wedding (Image courtesy: reallyswara)

Swara Bhaskar, who is awaiting the release of her film Anaarkali Of Aarah, told news agency PTI that Sonam Kapoor is a 'better friend' to her than she is. The 28-year-old actress told PTI: "Sonam is a tremendous person. We met on the set of Raanjhaana and I have to say that getting to know Sonam has been a surprise at every turn." Last month, Sonam Kapoor, who launched the teaser of Swara's film Anaarkali Of Aarah on social media, told PTI that she was 'excited and happy' to lend her support to Swara. The duo have co-starred in films such as - Raanjhanaa and Prem Ratan Dhan Payo.
"As an outsider you always have a perception even if you're an actor yourself. You have a perception about stars who are bigger than you. Similarly, I'd a perception of Sonam being a star child and a fashionista," the Tanu Weds Manu Returns actress told PTI.
She added: "But I have no shame in saying that our friendship is 100 per cent Sonam's effort. She is the one who not just befriended me but won over all my prejudices by constantly trying."
The Nil Battey Sannata actress said that she received the best compliments for her performance in the film Raanjhaana from the Saawariya actress. Remembering an incident from the film's shoot, she said: "One day, my vanity (van) wasn't working and Sonam was like 'Tell her to come to my vanity.' And I said no because I didn't want to be an intruder. But she came to me with the curlers still in her hair. She pulled me and made me sit in her vanity (van). Every time I chat with her, I discover that she is an amazing person."
Swara Bhaskar will be collaborating with Sonam Kapoor for the third time in Veere Di Wedding.The film, directed by Shashanka Ghosh, also features Kareena Kapoor and Shikha Talsania in lead roles.
(With PTI inputs)