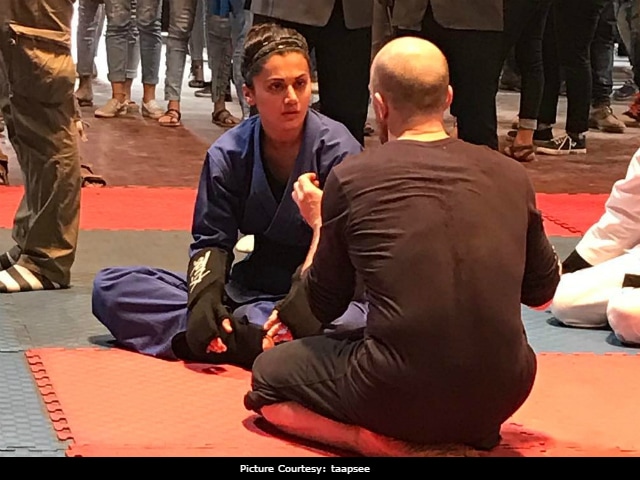 Actress Taapsee Pannu, whose second movie Aadukalam collected six National Film awards, has revealed that it is difficult for her to handle failure. Taapsee, who made her Bollywood debut with Chashme Baddoor, was quoted by PTI as saying: "For me, it's difficult to handle failure. You get confidence from success so you move ahead confidently. But if you have a failure, you start doubting yourself. You start questioning your decisions, there are doubts which haunt you for a few days after failure. For me, it is quite difficult to digest a failure. But, it is only a matter of few days then you get back." Her recent film Naam Shabana, also starring Akshay Kumar in an extended cameo, has collected over Rs 21 crores in four days of its release.
Taapsee, 29, admitted that she is always "stressed" and conscious about how her movie will perform at the box office. "From my first film till now, I always have this stress about numbers, I don't know why. I'm not saying it's right or wrong. I am always very conscious about the numbers my film is making, which is as important as how good my performance is," the actress was quoted by PTI as saying.
Taapsee, who plays the role of an undercover agent in Naam Shabana, underwent rigorous training in mixed martial arts for the role of Shabana Kaif in the film. She told PTI: "I've seen the side where no matter how great you perform, if the film doesn't do well people don't talk about it, all your efforts go down the drain. But, if the film does well no matter if you play a small part in it, you'll be benefited."
Earlier, she was also quoted by IANS as saying: "It's very difficult to get good films for us, so I am very much excited about all my films." Also, in a conversation with NDTV, Taapsee admitted that nepotism exists in the industry but one has to find a way out. She added that she is very proud of being an outsider as it helps in playing real life characters better.
Taapsee has starred in movies like Pink, Baby, The Ghazi Attack, Aadukalam, Vastadu Naa Raju and Mr Perfect. She will next be seen in Judwaa 2, also starring Varun Dhawan and Tadka, which is Prakash Raj's debut Bollywood project as a director.
(With inputs from PTI)