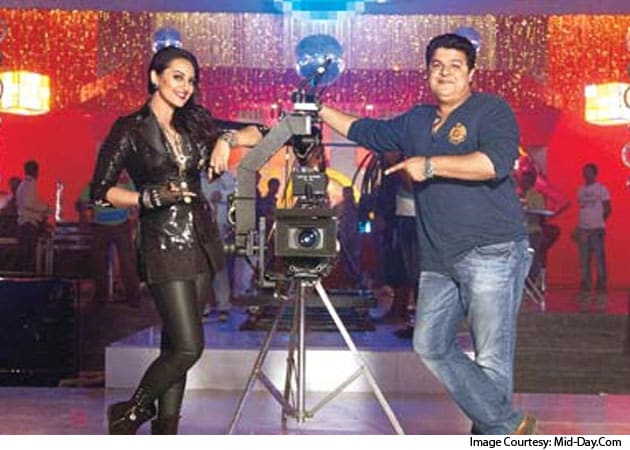 Sonakshi Sinha's item number from Himmatwala looked as if it was straight out of an '80s film on the Filmistan Studios.

The scene took us three decades back when Jeetendra and Sridevi were part of the original Himmatwala. The setting including the props for a special item song in the film reminded us of the disco era of Bollywood.
Sajid Khan , a self-proclaimed film buff of the '80s says, "The whole set is reminiscent of discos of those times and I have drawn inspiration from discotheques that started back then such as Scorpio, Xanadu, RGs, Cellars and Take Off. I used to frequent those places and that's how I made this entire set. It is my tribute to that era and that's why you will see iconic elements from that time."
So from Rubik cubes, Pac-Man video games, posters of Arnold Schwarzenegger, Michael Jackson, Mithunda, Rishi Kapoor from Karz, Tom Cruise in Top Gun, everything on the sets was a turn back in time.
The director adds, "The song aptly titled Thank God It's Friday also reminds us of those times when both Saturday and Sunday used to be a holiday."
And speaking of Sonakshi Sinha, who is shaking her booty to the track, Sajid says, "I was clear that I wanted an A-lister for my opening song. Sonakshi and I have been friends from sometime now and know each other well." The dance number will present Sona in a retro, non-Indian look.