Be it birthdays, anniversaries, film releases, festivals or other special occasions, the Khan siblings ensure that they celebrate with their parents and respective families in tow 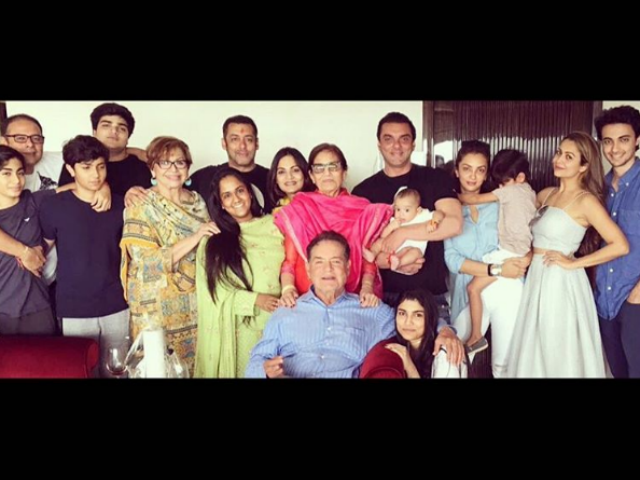 It's one for all and all for one in the prodigiously large clan headed by actor Salman Khan's father, writer Salim Khan. Everything they do, they do together. Paterfamilias presided over Thursday's Raksha Bandhan festivities, encapsulated by a photo posted by Salman's youngest sister Arpita Khan Sharma.
Arpita, whose son Ahil was born in March, Instagrammed this picture of - father Salim Khan, mothers Salma and Helen, husband Aayush Sharma, brothers Salman and Sohail, Sohail's wife Seema and children Nirvan and Yohan, Arbaaz's son Arhaan, sister Alvira with producer-husband Atul Agnihotri, their daughter Alizeh and son Ayaan, and more extended family. Arbaaz and Malaika were missed, but Malaika's sister Amrita Arora Ladak made an appearance.

Salman, 50, is known to be very close to his family and the actor took a break after the wrap of the first schedule of Kabir Khan's Tubelight to spend the day at home.


Being Bhai can't thank you enough for everything love you @beingsalmankhan

His rumoured girlfriend Iulia Vantur was reportedly spotted, but wasn't seen in the family pictures.
Meanwhile, Ahil was celebrating his first Rakhi with his cousins and was captured in a truly special moment with his grandfather by dad Aayush.