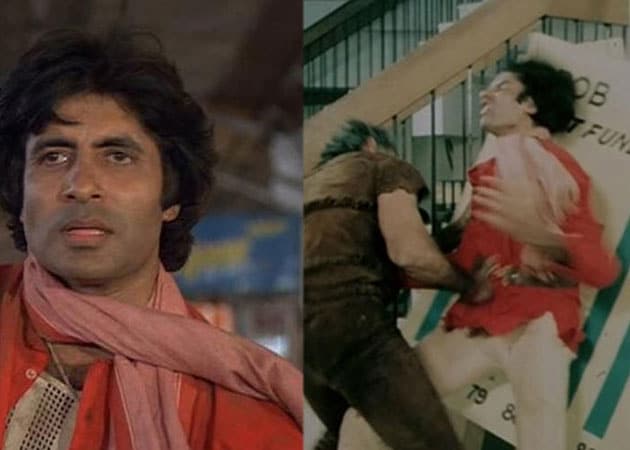 Mr Bachchan has not forgotten the day of his "rebirth" and nor have we. We woke up to this post on his Facebook page: "Aug 2, the day I lived again."

"Happy birthday Mr B, and never forget I was the first one to wish you" - this was Amitabh Bachchan's blog post, dated July 31/August 1, 2012.
This year too, Mr Bachchan has not forgotten the day of his "rebirth" and nor have we. We woke up to this post on his Facebook page: "Aug 2, the day I lived again ... my Coolie accident ... brought to Breach Candy Hospital, Mumbai and second surgery performed, where when I did not come out, was clinically dead for a few minutes ... so many that know wish me a Happy Birthday for today ... Many thanks in advance ..for it was the prayers of millions of my countrymen that saved my life."
31 years ago, on July 26 1982, Amitabh Bachchan suffered his famous near-fatal accident while shooting Manmohan Desai's Coolie in Bangalore. A mistimed jump in a fight scene with co-star Puneet Issar made him hit the corner of a table, instead of landing on top of it as he was meant to.
In instant and excruciating pain, a bleeding Mr Bachchan staggered out of the set and onto the lawns of Bangalore University, where the film was being shot. At first, crew members thought he was faking - and then they realized he wasn't.
Director Manmohan Desai made immediate arrangements to fly his injured star to Mumbai. En route, Mr Bachchan was barely conscious and could not speak. The plane landed at Mumbai's Santa Cruz airport where Big B's Silsila director Yash Chopra had organized an ambulance to take him straight to Breach Candy Hospital.
Doctors operated immediately but, even with the emergency splenectomy, Mr Bachchan remained close to death. The nation mourned, fans thronged temples offering to sacrifice limbs in exchange for their hero's recovery. Mr Bachchan's wife, Jaya, walked barefoot from Breach Candy to Siddhi Vinayak Temple everyday to pray. Prime Minister Indira Gandhi visited the hospital.
There was still no sign of life - till August 2. In a last ditch measure, doctors injected adrenaline straight into Mr Bachchan's heart. Almost immediately, Jaya Bachchan saw one of his toes move and exclaimed "Look, he's alive." August 2 became Big B's "second birthday."
Mr Bachchan would stay in hospital for many months before making a full recovery and resume shooting Coolie. The film, which released in November 14 1983, went straight to the top of the box office charts. The fight sequence between Amitabh Bachchan and Puneet Issar was frozen at a certain point and a superimposed message marked it as the exact moment when Mr Bachchan was injured. Director Manmohan Desai rewrote the ending of the film to have Mr Bachchan's character recover from an operation, just like he had done in real life. It would be inappropriate for the man who had cheated death for real not to do so on screen, the director said.