Rumours were rife that the photographs were from the sets of Aamir's next production, Secret Superstar, in which he is slated for an extended guest appearance. And the images soon went viral 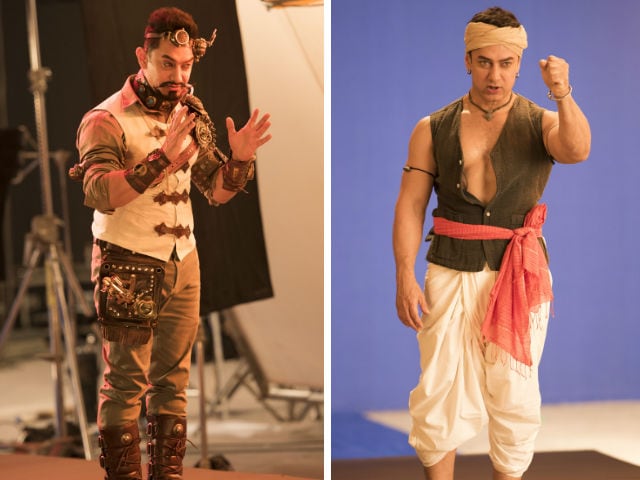 A few weeks ago, a few pictures of actor Aamir Khan sporting a whimsical and quirky look surfaced online and left everyone in a fix.
Rumours were rife that the photographs in which the actor was seen with a handlebar moustache, a styled beard and odd clothing, were from the sets of Aamir's next production, Secret Superstar, in which he is slated for an extended guest appearance. And the images soon went viral.
The truth behind the origin of the images, however, is something completely different. The actor has actually teamed up with Bollywood Parks Dubai for a ride based on the 2001 blockbuster film Lagaan: Once Upon a Time in India, which was produced by Aamir, directed by Ashutosh Gowarikar and became the third film from India to be nominated for the Academy Award for Best Foreign Film.
The ride, which is called 'Lagaan: Thrill of Victory' will feature Aamir in two forms. One, as the original character 'Bhuvan' from the film, and the other as his great-great-great grandson. The PK actor reveals: "We went for a steam-punk look as his character get-up, to give it a more futuristic look. He is very proud of his great-great-grandfather." And the images are actually from the shoot the actor participated in for initial work on the ride.
Lagaan, widely considered one of the finest films to be made in Bollywood is ranked amongst the "100 Best Films of World Cinema" by Empire Magazine, and is a part of "The All-TIME 25 Best Sports Movies" by Time magazine, hence making it a worthy feature in the fun-filled resort in Dubai, that should appeal to filmgoers of all ages.
"We make films with a lot of heart and emotions and some of them get this strange intangible quality which connects with people and Lagaan was one such film which connected with people across the world. It travelled on its own, we didn't have to do anything with it," Aamir said in a statement.
The actor added: "The ride is about giving people an exciting time, giving you a feeling of exhilaration, and it will take you back to the film. So, for people who have watched the movie, it will be a nostalgic experience. For everyone, we wanted it to be an exciting ride, it's very thrilling, it's bound to give you a rush."
Bollywood Parks Dubai, the world's first Bollywood-inspired theme park and a part of Dubai Parks and Resorts, will open its gates to the public on October 31.
The Lagaan: Thrill of Victory ride will be a part of the Rustic Ravine zone and guests can be part of the iconic cricket match played by Bhuvan and his fellow Champaner villagers against the British team through a rollercoaster motion simulator. The ride will also feature some of the distinct pieces used for Bhuvan from the original film.
Watch the making of 'Lagaan: Thrill of Victory' here: