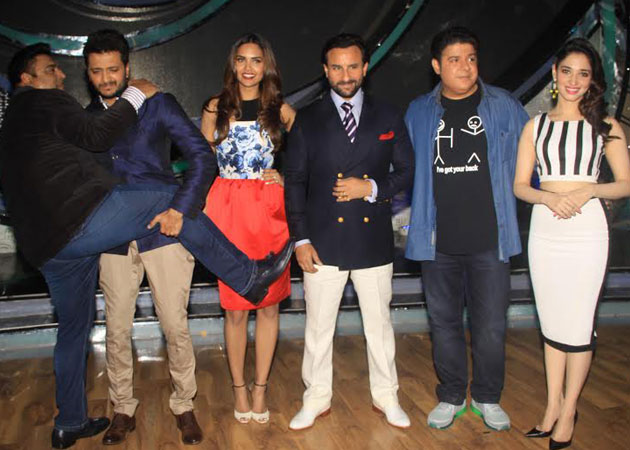 The team was in the capital to promote their upcoming movie.

Team Humshakals arrived in the capital on the last leg of their promotional tour.

Team Humshakals arrived in the capital on the last leg of their promotional tour.
Saif Ali Khan, Riteish Deshmukh and Ram Kapoor took centre stage along with female leads Esha Gupta and Tamannaah Bhatia minus the third leading lady Bipasha Basu who was missing and has been missing from the film's promotions.(Also read: No Sex Comedies for Tamannaah, Esha Gupta)
The very obvious first question asked to the film's director Sajid Khan was the reason behind Bipasha Basu's absence. The director first tried to ignore the question and changed the topic with witticisms. He requested the Delhi media to stand up and observe one minute of silence on the sad demise of his last movie Himmatwala that didn't work well at the box office.
As he waxed eloquent about how lovely his two leading ladies were, once again the question about Bipasha's absence from the promotions rose.
And promptly Sajid replied, "Reasons of absence are known to her." There have been reports that things are less than cordial between Esha Gupta and Bipasha Basu, who had shared screen space in Raaz. (Also read: Saif Ali Khan on Mimicking Father-in-Law Randhir Kapoor in Humshakals)
So, as some reporters asked about whether this time it was Esha's charm over Bipasha's, Esha responded, "Haan zyada chal gaya."
Things were reported to have been less than cordial between Esha and Bipasha in Raaz which then escalated once again on the sets of Humshakals.
So what went wrong for Bipasha to be so miffed? One source alleges that the Bengali beauty had been forced to sign the film, the lure being a hefty pay packet she couldn't refuse. Whilst another says Bipasha was cast opposite Riteish whilst her Race 2 co-star Saif had Esha and Tamannaah to romance, of which she didn't approve. A third goes as far to say that Bipasha felt Esha looks far better than her and was getting a better deal along with Tamannaah due to their closeness to Sajid.
Well, whatever the reasons, it seems it's only Bipasha who stands to lose and Team Humshakals was more than happy not share their moment of fun with her.