These actresses chose motherhood over stardom 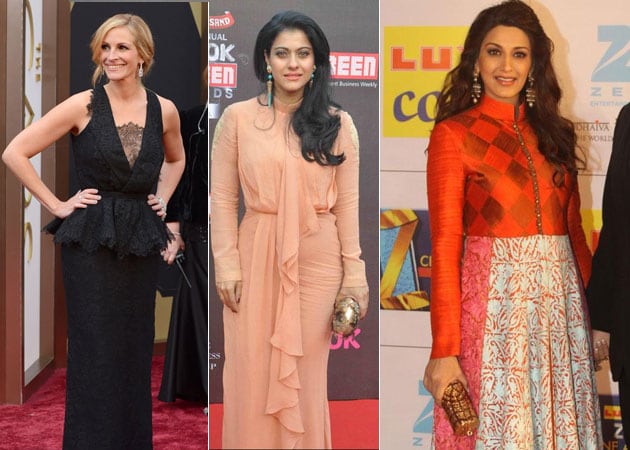 Be it Hollywood or Bollywood, actresses put in everything to achieve success and stardom. But once they marry and have children, these glam girls prefer to be hands-on mothers and say neither meaty roles nor red carpet perfect looks distract them from their domestic preoccupations.

Be it Hollywood or Bollywood, actresses put in everything to achieve success and stardom. But once they marry and have children, these glam girls prefer to be hands-on mothers and say neither meaty roles nor red carpet perfect looks distract them from their domestic preoccupations.
IANS lists some of the star moms who are enjoying domesticity and giving preference to their children over the grease paints and arc lights:
Hollywood
Julia Roberts: The Oscar-winning actress is the mother of nine-year-old twins Hazel and Phinnaeus and six-year-old Henry. She says she is okay with doing one movie a year as her children still need her to be around. She has no qualms about it as the Pretty Woman star has already made a mark in the film industry. Roberts, who has won prestigious awards like BAFTA and Golden Globe apart from Oscar, said that her family takes up a lot of her time and energy, but she is happy. She was last seen in the Oscar-nominated film August: Osage County in 2013.
Kate Winslet: While many stars worked hard to get back in shape post pregnancy, the Titanic star, a mother of three, chose to spend time with her children rather than sweating out in a gym. Winslet, who gave birth to her third child last year, said that she wants to be healthy and be around for her children rather than concentrating on getting a flat stomach.
Victoria Beckham: The former Spice Girls' band member and now a fashion designer considers her four children - sons Brooklyn Joseph, Romeo James, Cruz David and daughter Harper Seven - her world. She admits she has people to handle her tight schedule and everything revolves around the children. For instance, if there's a parents' night or an Easter bonnet parade or a nativity play, then she plans everything around that so that she can always be there for her kids.
Bollywood
Kajol: Ever since the Baazigar star gave birth to her daughter in 2003, her fans have seen her less on the big screen. Kajol, who has a son too, made it clear that children are her priority. She recently told IANS in an interview that she can't dump them and go off to work. Like every mother, she feels her children need her attention. She also wants to see them grow up.
The wife of Bollywood actor Ajay Devgn feels that since he acts in at least four films a year, she is required to be at home to spend time with their children. Kajol, who has mostly played lead actress in films like My Name Is Khan, Kuch Kuch Hota Hai and Kabhi Khushi Kabhie Gham, has often made special appearances in recent years in films like Student Of The Year, Rab Ne Bana Di Jodi and Om Shanti Om.
Farah Khan: For the filmmaker, everything can wait if her three children - daughters Anya and Diva, and son Czar -need her. Currently busy with her next venture Happy New Year, Farah once chose to stay back home and nurse her child who was feeling unwell. It clearly reflects her dedication towards motherhood.
Karisma Kapur: The actress, who entered the film industry as a teenager, used to feature in several films in a year. But after she became a mother in 2005, her presence on the silver screen began to decrease and she has no regrets. She was last seen in the 2012 film Dangerous Ishhq, which was a well-publicised comeback, but not a successful one.
She remains a devoted mother to daughter Samaira and son Kiaan, and has also penned a book on women. She was happy to be away from arc lights as she wanted to be with her children during their formative years and insists that her first priority will always be her kids.
Sonali Bendre: She made a comeback with Once Upon ay Time in Mumbai Dobaara! and declared that her first priority is motherhood and if she would get any time after taking care of her family, then only she would take up any work.