This Akshay Kumar Fan 'Pinched' Herself When Offered Film With Him 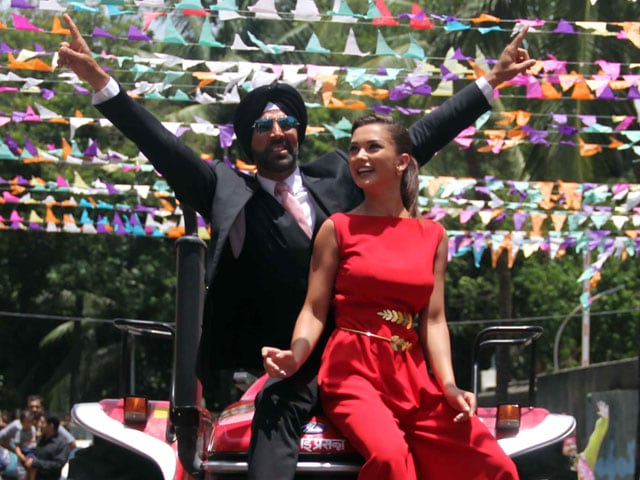 Akshay Kumar and Amy Jackson photographed at an event in Mumbai.

British model-actress Amy Jackson, who will be seen opposite Akshay Kumar in upcoming film Singh Is Bliing is a self-confessed Akshay Kumar fan. "I had to pinch myself. I got the call and didn't expect it. And right up till nearly the end of filming, I was thinking, 'Am I actually doing a film with Akshay Kumar?'," she said

British model-actress Amy Jackson said that she was extremely surprised when she was offered Singh Is Bliing and had to pinch herself to believe that she was going to star opposite Akshay Kumar.
"I had to pinch myself. I got the call and didn't expect it. And right up till nearly the end of filming, I was thinking, 'Am I actually doing a film with Akshay Kumar?' because I was a massive Akshay Kumar fan before and the first film that I ever watched was his and Katrina's film, Namastey London. I didn't think that I could get the chance to star alongside him, especially so early on in my career," said Amy.
Amy added that Akshay has been the best co-star. "He's the action king of Bollywood and not just the way he is as an actor, but mainly the way he is as a person. I learnt a lot from him from the way he conducts himself professionally. For instance, how we were up at crack of dawn today to get these promotions on and get them sorted. I think he is an inspiration," she said. (Also Read: Singh, His Kaur and Mega Bliing. Shades Recommended)
Since the trailer of the venture was released, the action scenes performed by Amy has impressed the viewers. And she now hopes to become a trend-setter in terms of action for actresses. "There is a lot of action in this film, which I haven't seen in Bollywood films before, so I would like to set a trend. I loved the action, I think it's something that's important, not just for heroes, but heroines can also do it," she said.
Akshay, too, is also impressed with Amy. "She is one of the best fighters I've come across as a heroine and she's done wonderful fights. And obviously, she's beautiful," he said. (Also Read: Akshay Kumar's 'Singh-Style Romance' With Amy Jackson. Is it For Real?)
Though she was sari-clad in her debut Hindi venture Ekk Deewana Tha, the 23-year-old started out as a model, so slipping into a bikini wasn't too difficult.
"I like to stay fit, so it's just generally healthy living and healthy lifestyle so I didn't really have to do much preparation for it. And when we're on set, Akshay is very helpful," said Amy, who was last seen opposite Vikram in Shankar's I.