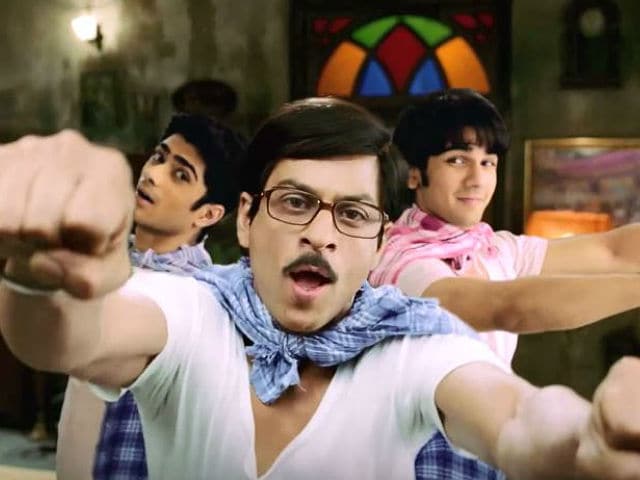 A still from the song.

Superstar Shah Rukh Khan is all set to turn 50 on November 2 and his fans have started celebrations a few days in advance.
A song composed by this two-member band from Rishikesh, who call themselves Jumbo Jutts, is the 'sweetest thing' King Khan has seen in a 'long time', at least that's what he said on Twitter:

It's perhaps the sweetest thing I hav seen in a long time. Wot a lovely song & thx @realjumbojutts. Best gift https://t.co/DMAdKLczxV

The song which is thora senti and zada mental is not co-incidental. In the song the Jumbo Jutt boys have used moments from Shah Rukh's films like Chak De! India, Mohabattein, Dil To Pagal hai, Dilwale Dulhania Le Jayenge, Rab Ne Bana Di Jodi, to name a few to create a song video with SRK, co-starring themselves. (Also Read: This Shah Rukh Khan Fan Sings Tujh Mein Rab Dikhta Hai Like a Boss)
It is quite a 'monumental' tribute, as they claim. Meanwhile, overwhelmed by Shah Rukh's appreciation, the boys tweeted:

Shah Rukh Khan is currently busy with the filming of Rohit Shetty's Dilwale, which releases on December 18 this year. The film also stars Kajol, Varun Dhawan and Kriti Sanon in lead roles.
SRK also has Maneesh Sharma'a Fan and Rahul Dholakia's Raees queued up for release next year.