This Gabbar-Batman Mash up Has Akshay Kumar's Tweet of Approval 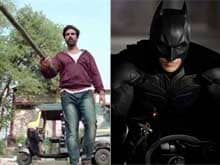 The fan-created video layers audio from Gabbar Is Back

Actor Akshay Kumar, 'a Batman fan,' has given a fan-created mash up of new film Gabbar Is Back and Gotham's caped crusader his stamp of approval on Twitter.

The video, posted on YouTube by an Akshay fan club, features scenes from The Dark Knight (2008) and The Dark Knight Rises (2012) set to the audio of the Gabbar Is Back trailer.
In the video, Akshay's Gabbar travels pachaas pachaas kos door to help his friend Batman defeat Gotham's underworld by wielding the Power Wala Danda. The Joker asks, "Gabbar Gabbar Gabbar, Who is this Gabbar?" Lucius Fox, impressed, says, "CBI-level ki enquiry ki hai iss Gabbar ne."
Director Christopher Nolan's reboot trilogy of the Batman saga, starring Christian Bale, is among the most admired superhero films of all time.
Meanwhile, Gabbar Is Back stars Akshay as a vigilante and Shruti Haasan. Kareena Kapoor makes a special appearance. The film releases on Friday.