Those Alia Bhatt Jokes? She's A-OK With Them. Here's Why

Alia Bhatt on tackling controversy: "I'm scared of controversy. There's no point in having all these opinions because they go all over the place" 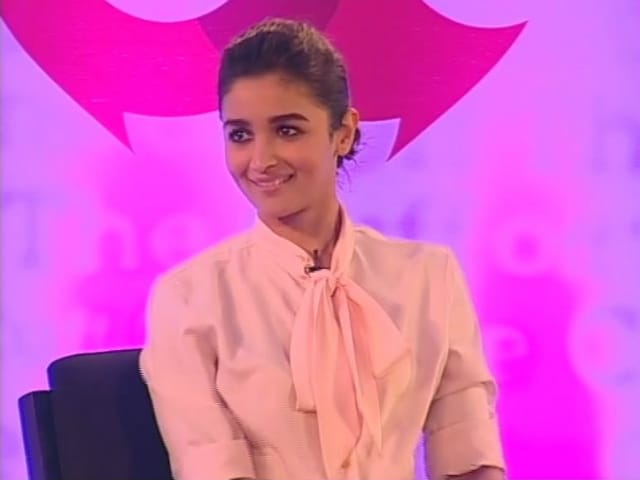 Alia Bhatt made our Friday. The 23-year-old actor told Barkha Dutt in the frankest of conversations in Off The Cuff that she's just fine with jokes about her, that there's no such thing as too many boyfriends and that working with Shah Rukh Khan was 'delightful.' Alia, who wrongly named politician Prithviraj Chavan (she said Chayan) as the President of India on national TV a couple of years ago, dropped her guard when asked about being the butt of jokes and later starring in the self-deprecatory Genius Of The Year video. "Of course, I was embarrassed," said Alia, but added that she's okay with the jokes about her because they made her popular. Alia also confessed that her manager now hands her a list of current affairs with names of ministers to go through.
Alia also opened up about relationships, being a star-kid and about the Bhatts being a so-called 'dysfunctional' family. She explained why Kapoor And Sons is her favourite movie - her part was the shortest and there was no additional tension or baggage. Talking about Shah Rukh Khan, with whom she co-starred in Dear Zindagi, she said: "The best part about Shah Rukh Khan is that he is always ready to take pictures." Alia also shared her experience of working in drug drama Udta Punjab, in which she starred as a Bihari migrant and for which she recently won an award.
Here are the top 10 Alia Bhatt quotes from the show:
Alia Bhatt on the almost Rajnikanth-like jokes about her: "I almost credit my popularity to those jokes so I'm happy. It's very simple - if I'm crossing your mind, I've hit jackpot"
Alia Bhatt on her President of India mistake: "The next time a reporter asks me about it, I'm going to ask him to pronounce YSL (Yves Saint Laurent)"
Alia Bhatt on tackling controversy: "I'm scared of controversy. There's no point in having all these opinions because they go all over the place"
Alia Bhatt on her Udta Punjab character: "It was very disturbing. After Highway, I swore I wouldn't take those roles again. I dreaded the walk to the set"
Alia Bhatt on why Bollywood is afraid to speak up: "People don't think you are entitled to an opinion. But you have to bear the consequences of what you say"
Alia Bhatt on opening up about her personal relationships: "I do have had a number of relationships. Does that make me any better a person or worse? I don't think so. But I fell people aren't really open to that yet"
Alia on the 'dysfunctional' Bhatt family: "What's normal? We should discard the word. We are a family because we want to be. We may be oddball but we are always there for each other"
Alia Bhatt on how she became an actor: "I have a clear memory of watching Karisma Kapoor and Govinda dance in a garden, dance in a room. I looked at them and decided I wanted to do that"
Alia Bhatt on working with Shah Rukh Khan: "He is so respectful of you and your thoughts, even though I'm Alia with 4 years' experience and he has 25 years"
Alia Bhatt on her childhood: "My mother kept me away from dieting and all when I was a child, so that I could have my own time, later"
Alia Bhatt on cheat meals: "Allow yourself a cheat meal. And be good rest of the time. That one day, you'll know the value of the burger"
Watch Alia Bhatt on NDTV:

Alia Bhatt has Badrinath Ki Dulhania coming up next year and she will also begin work on superhero film Dragon with Ranbir Kapoor.