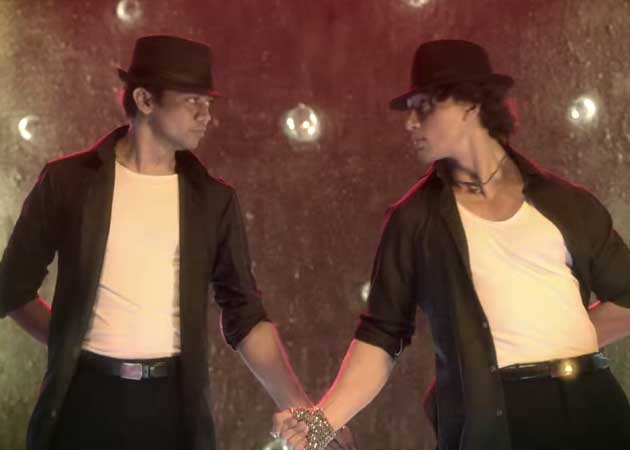 A still from the video shows Tiger and Paresh in action

The performers show off some really cool dance moves with fluidic accuracy but the question echoes in the viewers mind Whats the point of the video?

A few days back we could have confidently said that actor Tiger Shroff is on a highway to stardom. His first film was an unexpected hit. The audience took a liking to his dance and action and he was slowly developing a fan following. This despite the fact that many people had already written him off, even before the release, sighting reasons ranging from looks to his voice and the cheesy dialogues of the film.

But in spite of the detractors both Tiger and his debut movie survived the onslaught of the critics and came out a sleeper hit. Reports suggest that the actor has already signed more projects and has (surprisingly) managed to reject quite a few films where he was not the central character. But with no releases in the near future, and the fickle nature of fame in Bollywood, what does Tiger do to keep stay in the news? He uses his superpower - no, not the baby pink lips - his dance moves to be precise.

He recently released a dance video where he showcases his dancing chops with gusto. He may have gotten away with it, and even generated some praise for himself if only he hadn't chosen the wrong theme- A tribute to the 'King of Pop' Michael Jackson.

The video which begins with a long and boring monologue from Tiger moves on to him and his dance teacher, Paresh Shirodkar performing some of MJ's signature steps. To be fair, they do pull it off well and the video arouses intrigue. But that is only till the point where Tiger starts performing the steps to the tune of his Heropanti theme, Whistle Baja. Soon, the tribute takes a nosedive of sorts and turns into a gimmick driven publicity stunt.

The performers show off some really cool dance moves with fluidic accuracy but the question echoes in the viewer's mind - What's the point of the video?

If this is a tribute to Michael it's utterly disappointing and if it is just another publicity stunt, it has arrived a tad late. Whistle Baja was a catchy dance tune but it exhausted its airtime a long time ago. (Also Read: Why Hrithik is a fan of Tiger)

Tiger has also said that he would like to play Michael in his biopic and the description for the video on YouTube mentions that a Bruce Lee tribute is also on the way. We can only hope that if either ever happen they are better conceived that this video produced by Ayesha shroff.

Here's the video which irrefutably proves that Tiger is an amazing dancer but is guilty of masquerading as a tribute to arguably the greatest entertainer of all time.