To Queen, With Love, From Piku 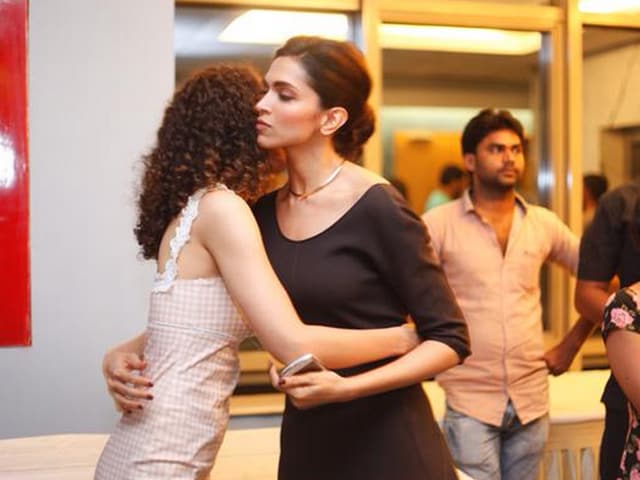 Deepika had dedicated her Best Actress award to Kangana, which did not go well with the actress

The shutterbugs recently caught actress Kangana Ranaut and Deepika Padukone kiss and congratulate each other on their various accomplishments at the special screening of the latter's film Piku.
Kangana, who recently picked up her second National Award for her role in Queen, seemed to have let go off her misgivings with Deepika and made amends at the screening.
Image courtesy: @ZiddiTitli
Deepika had praised Kangana's movie choices at large and even dedicated her Best Actress award to Kangana, which did not go well with her as she confessed that even though Deepika dedicated the award to her, but off-stage she never bothered to follow up.
However, before the controversy could pick up pace, Kangana told The Hindustan Times that Deepika recently made a phone call to Kangana in Manali, where her parents live. The Tanu Weds Manu actress was quoted as having said, "Deepika called me, and clarified that she had no personal equation with me to make a direct call (to appreciate her performance in Queen). Also, I explained to her how it would have been unjust for me to publicly acknowledge an award from her when I have decided not to attend any awards functions. It was an emotional and heartfelt conversation. I appreciate that she called me; she is truly courteous and very emotional, and I just love that." (Also Read: Deepika Padukone Called Kangana Ranaut. Here's What She Said)
Meanwhile, Deepika Padukone's film Piku has opened to good reviews and critics and colleagues have praised her performance in the Shoojit Sircar-directed film, in particular.
Kangana is looking forward to the release of Tanu Weds Manu Returns on May 22. The film, which is a sequel to 2009 hit film Tanu Weds Manu, also stars R Madhvan and is directed by Aanand L Rai.
Watch: