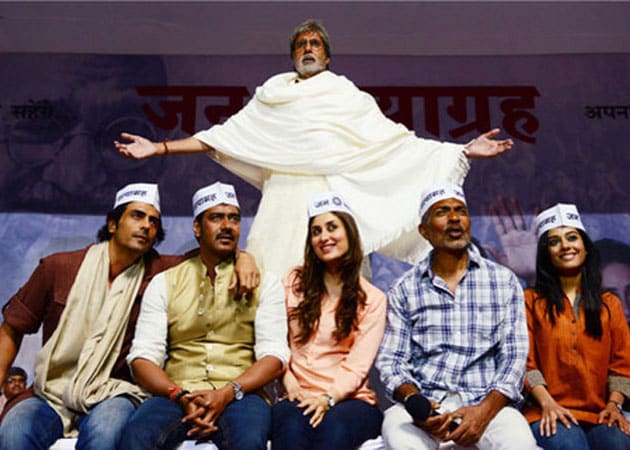 A still from the movie Satyagraha

Prakash Jha's much awaited film Satyagraha is the solo Bollywood release at the box office today. The movie, being touted as a political thriller, features Amitabh Bachchan. Ajay Devgn, Kareena Kapoor, Arjun Rampal, Amrita Rao and Manoj Bajpayee in key roles.
The plot reportedly revolves around a common man's fight for justice and the resulting struggle and aggression. Dwarka Anand (played by Amitabh Bachchan) goes on an indefinite hunger strike to demand justice in a Gandhian way. Ajay Devgn plays an ambitious entrepreneur who represents "India Shining" but faces an ideological struggle within himself. Kareena Kapoor plays a principled TV reporter, Arjun Rampal plays an idealistic politician while Manoj Bajpayee is his wily counterpart.
The scenes in the trailer, reminiscent of Team Anna's strike against the government, have given rise to the perception that Mr Bachchan's character is modelled on Anna Hazare. However, Prakash Jha has denied the comparison.
Satyagraha has been produced by UTV Motion Pictures. The music of the movie has been composed by brothers Salim and Sulaiman Merchant. The song Raghupati Raghav, in particular, has struck a chord with the people.