Aamir Khan's Dangal: "Dangal was an emotional experience for me," tweeted Anil Kapoor 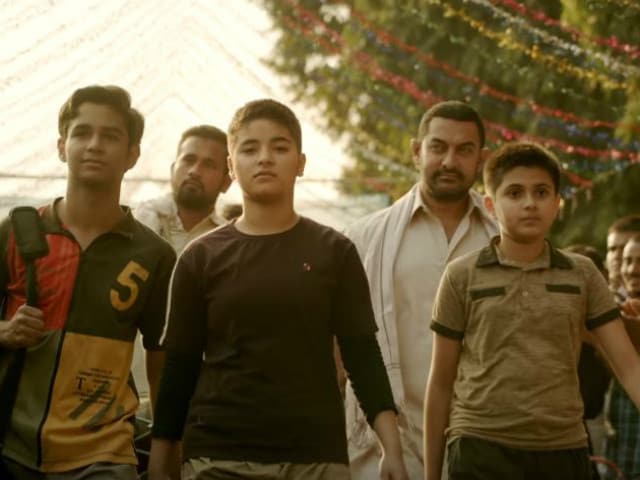 Aamir Khan's Dangal: A still from the film

It's going to be a blockbuster Friday for Aamir Khan fans as the much-anticipated wrestling drama Dangal hits screens today. Aamir's film has already been watched by a lucky few of his Bollywood colleagues and the verdict is that it is a must watch. Appreciation poured in from stars like Anil Kapoor, his nephew Arjun and actor Abhishek Bachchan on Twitter. "Dangal was an emotional experience for me. Even today, a father's struggle with society and self for his daughters is very real," tweeted Anil Kapoor while Abhishek said: "Dangal is such a beautiful film." Directed by Nitesh Tiwari, Dangal tracks the story of Haryanvi wrestler Mahavir Singh Phogat, who trained his daughters - Geeta and Babita - to become wrestling champions.
In his review to NDTV, Saibal Chatterjee said: "Dangal is a hugely entertaining sporting saga that works simply as a piece of good old storytelling leavened with rousing, crowd-pleasing ingredients.
Aamir Khan plays two versions of the protagonist - the younger Haryanvi wrestler as well a middle aged father. Aamir gained extra 25 kilos and weighed around 90 kilos to suit his part as the older version of Mahavir Phogat. He then trained extensively for six months to get back in shape to feature as the younger wrestling champion. TV actress Sakshi Tanwar features in the role of Mahavir's wife in the film which also stars Fatima Sana Shaikh and Sanya Malhotra as Geeta and Babita. Child actors Zaira Wasim and Suhani Bhatnagar play the younger versions of the Phogat sisters.
The regional section is represented by Tamil movie Kaththi Sandai. Directed by Suraj, Kaththi Sandai stars Tamannaah Bhatia and Vishal in roles while Jagapati Babu, Vadivelu, Soori, Sampath Raj also feature as key characters. Sasikumar's Balle Vellaiya Thevaa also hits screens today. The film is also produced by Sasikumar and stars Tanya in the lead role.