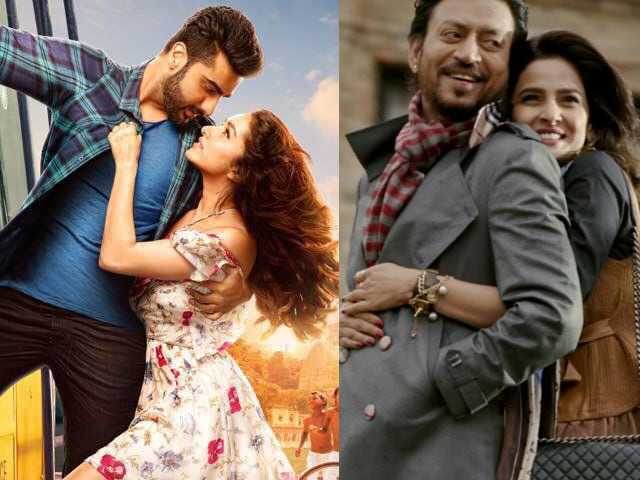 A still from Half Girlfriend and Hindi Medium

Movie-goers will be treated to two romantic comedy films this Friday, courtesy Mohit Suri's Half Girlfriend and Saket Chaudhary's Hindi Medium. Half Girlfriend is an adaptation Chetan Bhagat's novel of the same name and stars actors Shraddha Kapoor and Arjun Kapoor. The film is the story of Madhav Jha and Riya Somani, who meet during graduation in the Delhi University and fall in love, but there's a lot of complication as Riya has certain reservations about Madhav. After a brief separation they reunite, but things change and their love story takes a new turn. The film is a light-hearted comedy, that's apparent from the trailer and songs.
The second release of the week is Hindi Medium which stars Irrfan Khan and Pakistani actress Saba Qamar. The film is about a mother's desire to send her child to an A-list school. Though they have the financial means to support their daughter's expensive school fees, the parents do not have a background required by the school they aspire for their child. The film is a critique on the emphasis English language is given in India and the commercialisation of education system.
Meanwhile, Gurmeet Ram Rahim Singh's Jattu Engineer also releases today. Jattu Engineer is directed by Gurmeet Ram Rahim Singh (obviously) and his daughter Honeypreet Insan.
As the films gear up for release, one may wonder if any of these films will break the success spell cast by S S Rajamouli's Baahubali: The Conclusion, which is earning better than the new releases even three weeks after it hit the screens.