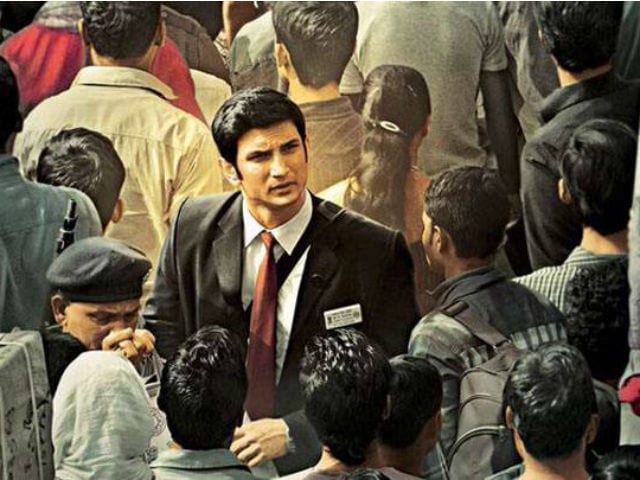 Sushant Singh Rajput in a still from M S Dhoni: The Untold Story

Sushant Singh Rajput's M S Dhoni: The Untold Story, a biopic on Indian cricketer M S Dhoni will hit the screens today.
Dhoni, who has been actively promoting the film with Sushant, met superstar Rajinikanth who wished them all the luck. Do they need anything else? Rajinikanth was pleasantly surprised to know that Sushant learnt the nuances of Dhoni's cricketing style. Sushant, who claimed that he practically became Dhoni while shooting the film, clarified that the makers aren't trying to glorify the cricketer.
"We are not trying to glorify Dhoni. We are not over-glamourising anything. Right from his birth to the 2011 World cup six that he hit, we are showing everything," Sushant told news agency IANS.
M S Dhoni: The Untold Storyalso stars Disha Patani, Kiara Advani, Anupam Kher and Bhumika Chawla.
Hindi film 3rd November has actors Meenakshi Bhagat, Kabir K, Saheem Khan in the star cast. A suspense thriller, the film has been helmed by Vasant Narkar.
Mark Wahlberg's Deepwater Horizon represents the Hollywood section this week. Directed by Peter Berg, the film is based on 2010 event and documents the worst oil spill in the US . The film also stars Kurt Russell, John Malkovich, Gina Rodriguez, Dylan O'Brien and Kate Hudson.
In the regional section, we have Telugu film Maanja starring Kishan Shrikanth, Esha Deol , Avika Gor and Deep Pathak. Maanja is a story of four teenaged friends who are provoked to plan the murder of a senior police inspector. The film has been directed by Kishan Shrikanth. There's another Telugu Hyper which is releasing today. Starring Ram Pothineni, Raashi Khanna and Sathyaraj, the film has been released by Santosh Srinivas.
Malayalam film Olappeeppi also releases today. The film socio-economic changes in Kerala in 1970 brought about by the Land Reforms Act. Directed by Krish Kymal, the film stars Biju Menon, Sreejith Ravi and Paris Laxmi in lead roles.