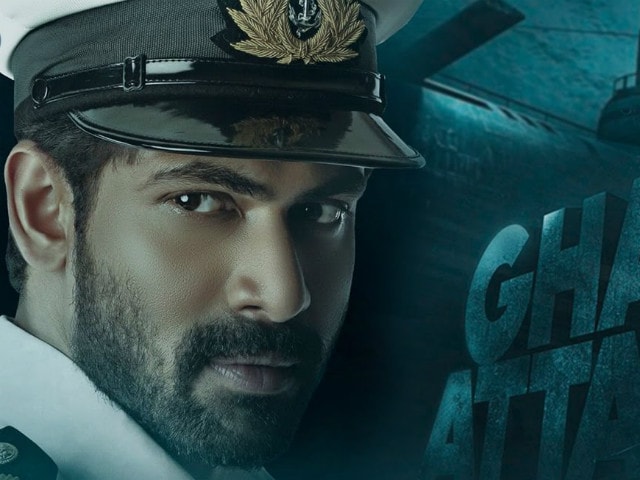 The Ghazi Attack: Rana Daggubati in a still from the film

Rana Daggubati's much-awaited war drama The Ghazi Attack releases today. The Ghazi Attack documents the story of Pakistani war-submarine PNS Ghazi's role in the Indo-Pakistan sea battle of 1971 and the mysterious sinking of the old submarine. The Ghazi Attack will also narrate the story of the naval officer, who guided his team of men to survive underwater for 18 days during the ongoing war. Taapsee Pannu, who co-stars with Rana Daggubati for the first time, plays the role of a refugee in the film. The Baahubali actor Rana Daggubati, who features as Lt Commander Arjun Varma in The Ghazi Attack, had to undergo intensive underwater training for shooting for the film. The Ghazi Attack also releases in Telugu as Ghazi.
Talking about his experience of shooting the film, Rana Daggubati told news agency PTI: "I am a certified deep sea diver with a professional diving licence, but it has been a while since I did my last dive and I so wanted to try my skills. I had to do a few rehearsal rounds before I started the shoot, but it was not so simple because we didn't know what we would encounter. We had to look out for sudden water currents and for pieces of metal. To shoot such scenes one has to be trained specially."
Directed by Sankalp Reddy, The Ghazi Attack also stars Taapsee Pannu, Atul Kulkarni and Kay Kay Menon in the key roles. Also releasing today in Arshad Warsi's new film Irada. Directed by Aparnaa Singh, Arshad Warsi's crime thriller also stars Naseeruddin Shah, Divya Dutta, Sagarika Ghatge, Sharad Kelkar and Nikhil Pandey in significant roles.
Running Shaadi, Taapsee Pannu and Amit Sadh's new film also hits screens today. Directed by Amit Roy and produced by Shoojit Sircar, Running Shaadi is actually the story of a young couple, who create an online portal to help couples elope and get married.
The Hollywood corner is represented by movies like Split, Hidden Figures, John Wick 2 and Silence.