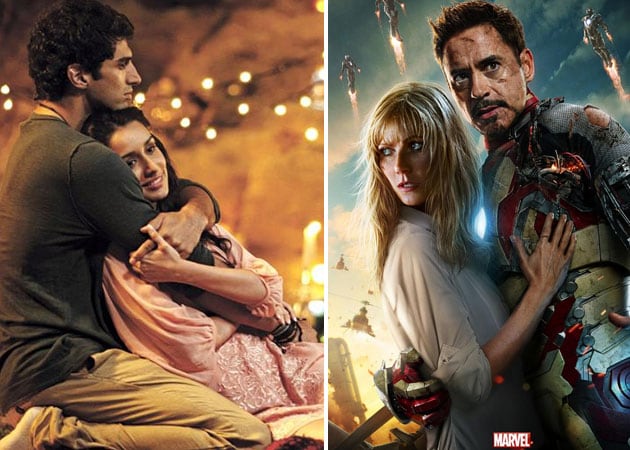 It is Bollywood vs Hollywood at the box office today, with Aashiqui 2, a remake of Mahesh Bhatt's hit film, and superhero movie Iron Man 3 up for release.

It is Bollywood vs Hollywood at the box office today, with Aashiqui 2, a remake of Mahesh Bhatt's hit film, and superhero movie Iron Man 3 up for release.
Directed by Mohit Suri, the man behind films like Kalyug (2005), Raaz: The Mystery Continues (2009), and Murder 2 (2011), Aashiqui 2 features Aditya Roy Kapur and Shraddha Kapoor in the lead.
A musical love story, Aashiqui 2 is produced by by Bhushan Kumar, Krishan Kumar and Mukesh Bhatt. It is inspired by Mahesh Bhatt's 1990 film Aashiqui which featured Rahul Roy and Anu Agarwal in the lead.
Aditya Roy Kapur, who debuted in Bollywood with 2009's London Dreams and later acted in 2010's Action Replayy and Guzaarish, is quite excited about his first film as the male lead. His brothers, UTV head Siddharth and Nautanki Saala actor Kunaal, are happy for him too.
"Everyone is very excited. Both my elder brothers quickly checked YouTube when the promo was released, and they were very happy," the 27-year-old said in an interview.
And the actor also enjoyed shooting for the film. "We enjoyed a lot. We shot in Goa, South Africa and Mumbai. Actually, outdoors is more fun as for that time everyone is together as a team. You get to see them more as your friends and family. In this film, everyone was very close," Aditya said.
Shakti Kapoor's daughter Shraddha debuted in the Hindi film industry with 2009's Teen Patti and was last seen in 2011's Luv Ka The End. And the actress admits to sharing a great bond with Aditya. "Aditya and I got comfortable with each other and it shows on the screen. People have been calling me and telling me that we have a good chemistry. Off screen, we have become good friends and somewhere that has translated on the screen as well. That is wonderful," said the 24-year-old.
Also out today the third installment in the Iron Man series. Directed by Shane Black, the film features Robert Downey Jr and Gwyneth Paltrow reprising their roles as industrialist Tony Stark aka Iron Man and Pepper Potts. The film is releasing in India a week before it releases in the US. Indian-origin actor Ben Kingsley plays the villain, The Mandarin.
The third film in the series will see Stark embark on a journey of revenge as his world is reduced to rubble by a nasty enemy.
The film also features Don Cheadle, Guy Pearce, Rebecca Hall, and Jon Favreau.
(With IANS inputs)