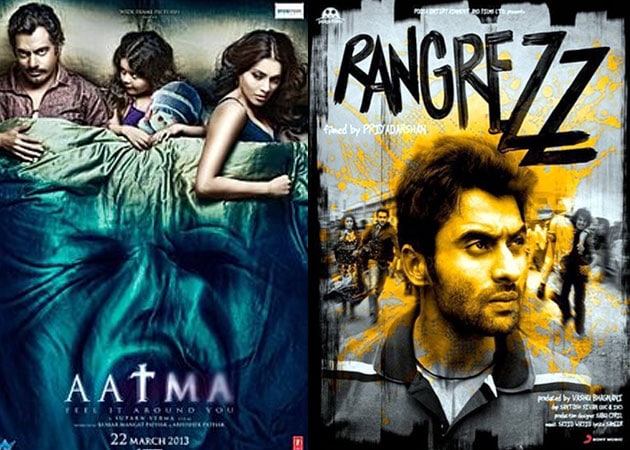 It's a double whammy at the box office today with Aatma and Rangrezz up for release.

It's a double dhamaal weekend for cine-goers who have a choice of horror and drama/action releasing at the box office today.

It's a double dhamaal weekend for cine-goers who have a choice of horror and drama/action releasing at the box office today.
First up is Aatma, a psychological thriller. The film is directed by Suparn Verma, whose previous films include Acid Factory and Ek Khiladi Ek Haseena.
Aatma features Bipasha Basu and Nawazuddin Siddiqui in the lead roles and is a story of a single mother Maya (Bipasha), who manages to escape the cycle of abuse by her husband (Nawazuddin). But her problems don't end with the death of her husband. She is tormented by the fear of that her daughter (played by Doyel Dhawan) will be taken by her husband to his world.
Bipasha reportedly found shooting the domestic violence elements of the film unsettling. Director Suparn Verma said in an interview, "Both the actors were willing to go into the unsafe zone that they have never been in before. For Nawaz it was a very deep personal space that he had to go in and get totally psyched about. Bipasha has gone through hell emotionally during the making of Aatma. I mean it has traumatised both the actors. It has traumatised me while writing it and I can only imagine what impact it will have on the audience."
Next up for release is Priyadarshan's Rangrezz which features Vashu Bhagnani's son Jackky and is a remake of Tamil hit film Naadodigal. A drama/action film, Rangrezz promises an emotion-laden action.
For actor Jackky Bhagnani, it wasn't easy to shoot for the film. He had to come out of his comfort zone and explore his potential. "As an actor, you have to prepare a lot (for roles)... I think people who are expecting me to do something different and out of my comfort zone, I have done that in this film. I hope people like it," the 28-year-old said in an interview.
(With IANS and PTI inputs)