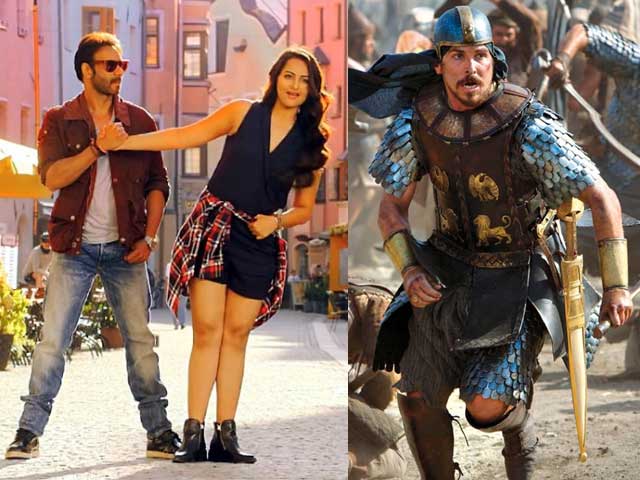 A still from Action Jackson and Exodus: Gods and Kings respectively

Hollywood and Bollywood is high on action and adventure this week

Action and adventure lovers are in for a treat as Bollywood and Hollywood offer Prabhu Deva's Action Jackson and Ridley Scott's Exodus: Gods and Kings this week. Also out is Bhopal: A Prayer For Rain.

Director Ravi Kumar's drama Bhopal: A Prayer for Rain depicts the plight of people affected by the 1984 Bhopal Gas Tragedy, the world's worst industrial disaster. The story revolves around the tale of a rickshaw puller Dilip (played by Rajpal Yadav) who lands himself a job in the Union Carbide plant and observes the lax safety measures at the plant. The plot shows how the negligence of officials leads to the leakage of methyl isocyanate, thereby killing and maiming tens of thousands of people.

Director Amit Masurkar's romantic comedy Sulemani Keeda is a story of two friends, Dulal and Manik, who want to write a Bollywood film. But they are left in a fix when they are have to choose between friendship, love and a golden opportunity for their career.

Hollywood offers adventure and drama with director Ridley Scott's Exodus: Gods and Kings starring Christian Bale, Joel Edgerton, Aaron Paul and Ben Kingsley among others. The movie, based on a an episode from the Bible, shows how courageous and defiant Moses turns into a one-man-army rising against the Egyptian Pharaoh Ramses and liberating 600,000 slaves.

Paul Schrader's thriller Dying of the Light, based on author George R R Martin's novel of the same name, chalks the predicament of CIA officer Evan Lake (played by Nicolas Cage), who refuses to retire in order to find and avenge a terrorist who tortured him on a mission that saw an unexpected turn.