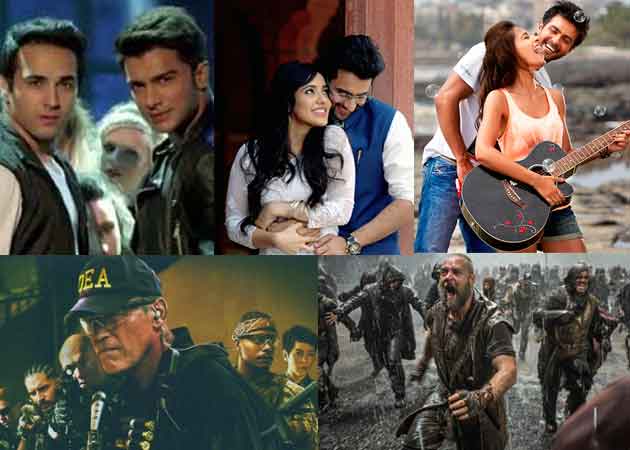 This weekend has Dishkiyaoon, O Teri and Youngistaan releasing from Bollywood.

Small is big this weekend as three not-so-big-banner movies release today.
The first is Shilpa Shetty's debut as producer Dishkiyaoon. Revolving around the Mumbai underworld, it stars Harman Baweja and newbie Ayesha Khanna. Sunny Deol will be making a comeback of sorts to the silver screen playing a Haryanvi character. The added attraction to this movie is the item number featuring Shilpa Shetty. So, with a somewhat been-there-done-that plot and role, will Harman be able to break his box office jinx? We'll see.
The second release this weekend is the Atul Agnihotri-produced O Teri. Salman Khan has gone out of his way to promote his brother-in-law's film, or so one hears. Featuring Fukrey star Pulkit Samrat, debutant Bilal Amrohi and Game actress Sarah Jane Dias, the movie tells the story of journalism interns who are striving to make it big in life.
The third Bollywood release, Youngistaan, as the name suggests, is about the young Hindustan. Starring Jackky Bhagnani, Neha Sharma and Kayoze Irani in key roles, the movie is a love story set in the backdrop of politics.
Hollywood has more interesting releases coming up in biblical epic Noah starring Russell Crowe, Jennifer Connelly, Emma Watson and Anthony Hopkins. The Darren Aronofsky film traces the story of the building of Noah's Ark.
The second Hollywood offering is the crime thriller Sabotage, starring Arnold Schwarzenegger. The movie is about a drug enforcement task force and their quest for survival.