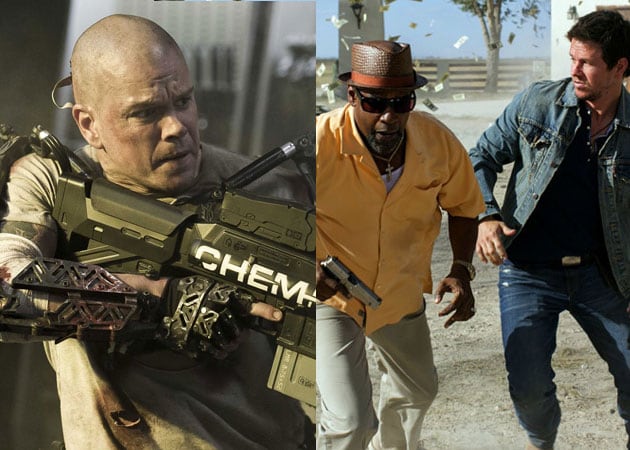 Still from Elysium and 2 Guns

It's Hollywood vs Bollywood at the box office this weekend with Matt Damon's Elysium,Denzel Washington's 2 Guns, Rohit Khaitan's Prague, Anubhav Sinha's Warning and Veena Malik's Super Model set for release.
Directed by Neill Blomkamp, Elysium is an American science fiction action-thriller film starring Matt Damon and Jodie Foster. In post-apocalyptic 2154, where the very wealthy live on a man-made space station while the rest of the population resides on a ruined Earth, a man takes on a mission that could bring equality to the polarized worlds.
2 Guns revolves around two buddies - Bobby Trench (Denzel Washington) and Marcus Stigman (Mark Wahlberg) - who decide to rob a bank that holds a Mexican drug lord's wealth after being cheated by him. However, their plans go awry and they find themselves on the run. While fleeing, they learn the secret of their shaky alliance: neither knew that the other was an undercover agent.
Also up for release is Rohit Khaitan's Prague, a psychological drama, which revolves around the lives of architects and their paranormal experiences as they set out to explore Prague.
Shot in 3D, Anubhav Sinha's Warning is reportedly an underwater thriller and stars young actors Santosh Barmola, Suzana Rodrigues, Varun Sharma, Manjari Phadnis, Jitin Gulati, Sumit Suri and Madhurima Tulii.
The high point of director Navin Batra's Super Model is that it stars controversial Pakistani actress Veena Malik and her ex-boyfriend Ashmit Patel. Their romance on the reality show Bigg Boss boosted TRPs, now they are set to woo the box office as well. The movie revolves around the personal and professional struggles that aspiring models face before making it big in the fashion world.
Directed and produced by Jaideep Chopra, thriller Maazii stars Mohammed Zeeshan Ayyub, Ashok Banthia and Manish Chaudhary.
-With IANS inputs