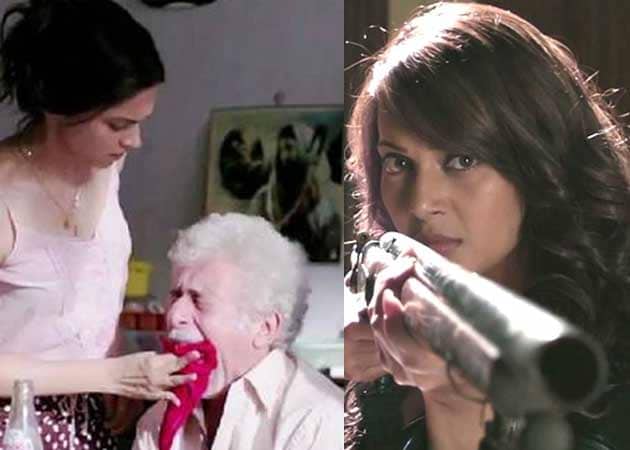 A still from Finding Fanny and Creature 3D respectively

Bollywood offers a platter of romance, satire and thrill this time while Hollywood is big on horror and thrillers

Bollywood offers a platter of romance, satire and thrill this time.

The movie has already garnered much attention be it the distinct song sequences, colourful costumes, its <i>Goan</i> setting or for the use of controversial words like 'fanny' and 'virgin' in the movie.

The movie is based on a road trip undertaken by the cast to find Fredie's (Naseeruddin Shah's character) long lost love.

Actress Deepika Padukone plays Angie, a young widow, who helps Fredie find his unrequited love after a hiatus of 46 years.

Veteran actors Pankaj Kapur and Dimple Kapadia are seen being their quirky best in the trailer and promos of the film. The movie looks promising and a fresh change from the usual <i>masala</i> grind.

If, romance is not your cup of tea, you can watch sci-fi thriller <i>Creature 3D</i> starring Bipasha Basu and Imran Abbas Naqvi. Directed by Vikram Bhatt, the movie revolves around a girl traumatized by the sudden deaths of guests staying at her hotel. But she relentlessly decides to find the horrific 'creature' with the help of a zoology expert. Watch the movie to know how the creature looks like.

Hollywood, too, offers spine-chilling thrillers this week. Watch horror film <i>Deliver Us from Evil</i>, which revolves around a New York police officer fighting a series of crimes plaguing the city. He jons hands with a priest to exorcise and free possessed people. Directed  by Scott Derrickson, the movie stars Eric Bana, Edgar Ramirez and Olivia Munn.

You can also opt for the thriller movie <i>The Prince</i>, starring Jason Patric, Bruce Willis, John Cusack and Rain. Directed by Brian A Miller, the movie is based on a widowed father who is forced to return to the world of crime after his daughter is kidnapped by a former foe.

Jason Patric plays the father who returns to the world of baddies with his best friend, played by John Cusack. Wonder if turning a con is the way out or just gets the devoted father into more trouble? The movie seems to be an action-packed roller-coaster ride.