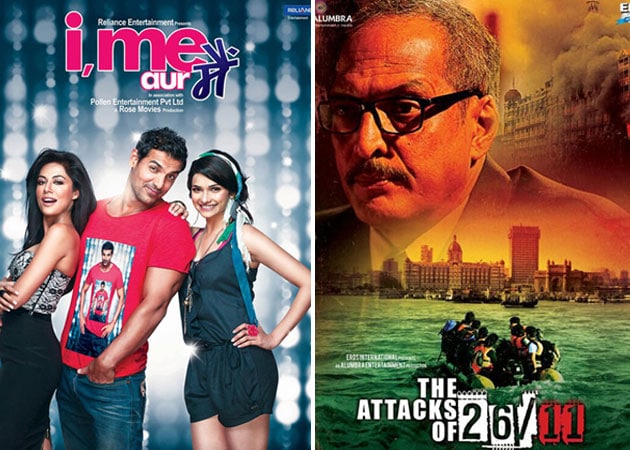 A romantic comedy and a thriller at the box-office today.

Two very different movies will compete at the box office today.
I, Me Aur Main is a romantic comedy directed by debutant Kapil Sharma. The film features John Abraham, Chitrangada Singh and Prachi Desai in the lead.
The plot of the film revolves around Ishaan (John Abraham), a mama's boy, who is a music producer working in Mumbai. He ignores his family including his mother (Zarina Wahab) and sister (Mini Mathur) and his girlfriend (Chitrangada Singh).
Until, his new neighbour Gauri (Prachi Desai) makes him realise the importance of relationships in life.
The other movie, which will face the box-office heat this weekend, is Ram Gopal Varma's ambitious project The Attacks of 26/11.
A crime thriller, the movie is based on the 2008 Mumbai attacks. The film stars Nana Patekar as Rakesh Maria, Joint Commissioner of Police and newbie Sanjeev Jaiswal as Ajmal Kasab.
The music of the film was launched at Leopold Cafe in Mumbai, one of the spots where terrorists attacked during the Mumbai carnage on November 26, 2008.