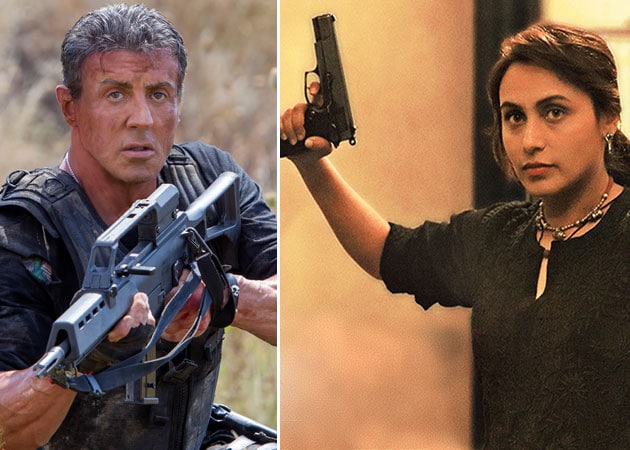 Action film fans are in for a treat as Rani Mukerji?s Mardaani and Sylvester Stallone?s The Expendables 3 are set to release today.

Action film fans are in for a double bonanza with Rani Mukerji's Mardaani and Sylvester Stallone's The Expendables 3 releasing today.

Action film fans are in for a double bonanza with Rani Mukerji's Mardaani and Sylvester Stallone's The Expendables 3 releasing today.

Actress Rani Mukerji's Mardaani is her first film after she married Yash Raj Films chief Aditya Chopra and will now be seen in an aggressive role.

Mardaani, the first Yash Raj movie to be rated 'A' and much to the dismay of its producers, deals with child trafficking and stars Rani as tough Mumbai cop Shivani Shivaji Roy.

The other action film set to release is Sylvester Stallone's The Expendables 3.

The third film in the series has Mr Stallone recruiting a new team to fight a former 'Expendable' played by Mel Gibson, who went rogue and was believed to be dead. His motley crew of strongmen include Jason Statham, Arnold Schwarzenegger, Harrison Ford, Antonio Banderas and Jet Li.

Both films will join others from the 'Action August' group - Kick and Singham Returns.

The other releases of the day include Mad About Dance, docu-drama Katiyabaaz, Mumbhai Connection and Life is Beautiful.