TOIFA begins in Canada with music 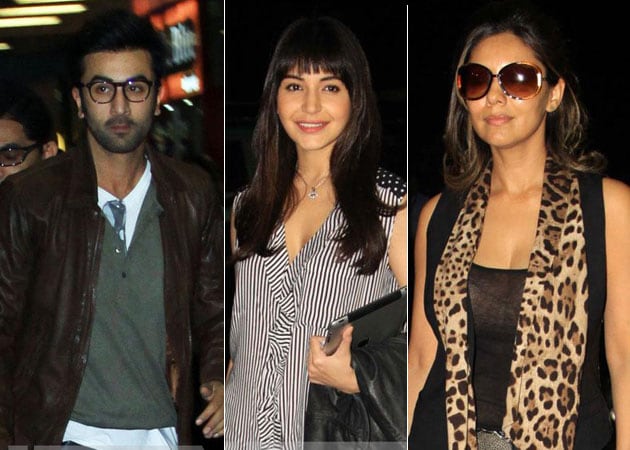 Ranbir Kapoor, Anushka Sharma and Gauri Khan were among the first among the Bollywood stars to arrive for the awards

The debut edition of the film awards kicked off with a musical night with high voltage performances by talented singers.

From Sunidhi Chauhan, Mohit Chauhan and Hard Kaur to Kavita Seth and Shalmali Kholgade - the debut edition of Times of India Film Awards (TOIFA) kicked off with a musical night with high voltage performances by talented singers who belted out hit numbers like Pee loon, Masakali and Ishq sufiyana, leaving the audience craving for more.
Held at Vancouver's Pacific Coliseum on Thursday, the concert was a mix of romantic ballads to pop numbers that captivated the audience, mostly NRIs.
Kavita performed her hit numbers including Iktaara and her most recent Tumhi ho bandhu, while Mohit, known for his romantic ballads, wooed the crowd with Dooriyan, Pee loon, Masakali and Nadaan parindey.
It that was not enough, Sunidhi, known for her peppy and foot-tapping numbers, set the stage on fire when she took to the mike to render Ishq sufiyana, Aavaiye, Bin tere, Halkat jawani, Te amo, Babli badmaash and Yaram.
The performances kept the audience on their feet - they were clapping, whistling, and dancing.
Hard Kaur, the face of hip hop in India, performed some of the most popular dance tracks like Peeney Do, Char baaj gaye and Singh is king.
The Pareshaan fame singer Shalmali performed Lath lag gayi and her recent hit song Radha.
Not only that, multifaceted choreographer Shiamak Davar, revisited his singing days by crooning Jaane kisne song from his own album.
Another surprise for the evening was a duet by Shalmali and Hard Kaur. They mesmerised the audience by singing hits like Daaru desi and Ek glassy and their closing act of Gangnam style was the cherry on the cake.
Host Neha Dhupia thoroughly entertained the eager crowd with her humour and witty oneliners. The icing on the cake was a competition titled Kaun Banega Neha Ka Pati (husband) where Neha asked a few Punjabi boys from the crowd to dance on item songs and later shortlisted the best among the lot.
The first day witnessed arrival of some of the known names from Bollywood including Anurag Basu, Ranbir Kapoor, Anushka Sharma, Gauri Khan, Karan Johar, Urmila Matondkar and Gauri Shinde.
Shah Rukh Khan, Priyanka Chopra, Madhur Bhandarkar and Sujoy Ghosh are expected to join them soon. Vineet Jain, managing director, Times of India Group said the award is yet another step "for us in getting closer to millions of Indians across the globe".
"TOIFA's Musical Extravaganza is a tribute to the legendary Hindi Cinema music that audiences have been cherishing for 100 years now. It's a great way to kick-start the TOIFA celebrations in Vancouver and we are looking forward to a gala weekend ahead," he added.