Valentine's Day Will Be Special For Bipasha Basu, Kishwer Merchant, Divyanka Tripathi And Other Newly-Weds

Celebrities like Bipasha Basu, Hazel Keech, Kishwer Merchant and Divyanka Tripathi will be celebrating their first Valentine's Day after getting married 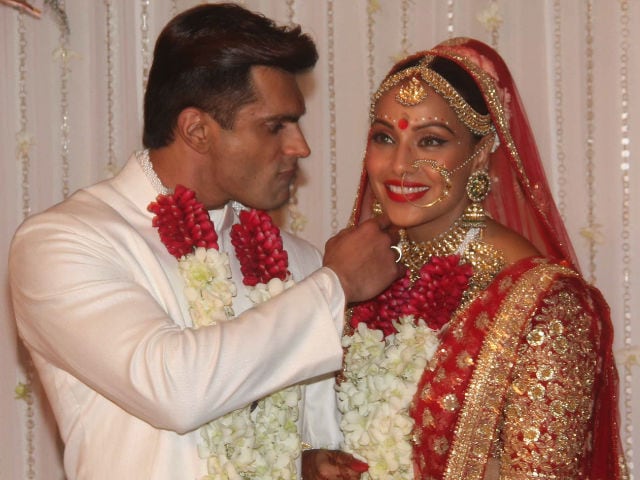 It is the Valentine week, or the week of love - a time to channel your inner romantic. Take a cue from actors who, by dint of the kind of films and TV shows we churn out, are fairly practiced at this love-shove business to begin with. This year, Valentine's Day will be special for Bipasha Basu, Preity Zinta, Hazel Keech, Divyanka Tripathi and Kishwer Merchant, all of whom got married in the past year. We don't know how they plan to celebrate but we're sure we'll find out soon enough, since each of them meticulously documents festivities on their social media accounts. Here's a list of celebrity couples celebrating their first Valentine's Day as Mr and Mrs this year:
Bipasha Basu and Karan Singh Grover
Actress Bipasha Basu married television star Karan Singh Grover on April 30, 2016 after a courtship of one year. The actors fell in love on the sets of Alone. Ahead of Valentine's Day, the couple have shot together for a commercial.
Take a look at this 'lovely video' featuring Bipasha and Karan:


My Valentine's has become special with the #OPPOF1s Rose Gold Limited Edition. Take a look at this lovely video. #BestValentineGift Pre-order now at http://bit.ly/2k7oBEA

A video posted by bipashabasusinghgrover (@bipashabasu) on Feb 6, 2017 at 8:40pm PST

Bipasha and Karan were often spotted together at parties and holidays before they got married. Karan was previously married to actresses Shraddha Nigam and Jennifer Winget. Bipasha and Karan's wedding was a close-knit affair and the rituals took place as per Bengali traditions.


Thank you @afsarzaidi @udaysinghgauri @anishisharma @neh_sharma85 @malvikapanjabi Edgar Parul Dhruv Nabeel Alok and the entire team @weareexceed ! Best team handling every aspect of my life and now my most important day , my wedding. Love you all. You are my family

Bipasha and Karan were spotted celebrating the New Year in Australia.
Hazel Keech and Yuvraj Singh
Cricketer Yuvraj Singh married model-turned-actress Hazel Keech in November 2016. Their wedding was the most-talked about events of the year. The couple first had a Sikh wedding in Chandigarh and then flew to Goa for another wedding as per Hindu rituals. Their wedding was attended by Virat Kohli, Anushka Sharma, Mahendra Singh Dhoni and his wife Sakshi, and several other cricketers.
The couple got engaged in 2015 in Bali. In a chat show, Yuvraj had revealed that he had proposed to Hazel three years back, but she had turned him down, making him determined to marry only her.
The couple haven't yet revealed their Valentine's Day plans. Until then, browse these pictures of them:

As my niece said "you look like Jasmine and Alladin" straight from a Disney movie is where you must get your inspiration @jjvalaya. My favourite earrings and maang tika from @satyanifinejewels

Hazel and Yuvraj went to an undisclosed location for their honeymoon.
Kishwer Merchant and Suyyash Rai
Television stars Kishwer Merchant and Suyyash Rai had a fairy tale wedding on December 16. The couple dated for about six years before getting married. They first met on the sets of the show Pyaar Ki Ek Kahaani and since then, it was no looking back for them. Last month, the couple flew to California for their honeymoon and the pictures are proof that they had the time of their lives.
Here are some pictures from their honeymoon diaries:

Kishwer and Suyyash also appeared together on Bigg Boss.
Divyanka Tripathi and Vivek Dahiya
Divyanka and Vivek are among the top television actors. They fell in love on the sets of Ye Hai Mohabbatein. Divyanka and Vivek married on July 8, 2016 in Bhopal. The couple also shot for an adorable wedding trailer Rang Dey.

A video posted by Divyanka Tripathi Dahiya (@divyankatripathidahiya) on Jul 25, 2016 at 12:12am PDT

A photo posted by Divyanka Tripathi Dahiya (@divyankatripathidahiya) on Jun 28, 2016 at 10:01am PDT

They went for a month-long honeymoon to Europe during Christmas and New Year.


#Honeymoon #Boat #Breeze... A perfect recipe for #TitanicPose! How could we not do it!

A photo posted by Divyanka Tripathi Dahiya (@divyankatripathidahiya) on Jan 3, 2017 at 3:42am PST

A photo posted by Divyanka Tripathi Dahiya (@divyankatripathidahiya) on Dec 28, 2016 at 5:26pm PST

Divyanka stars as the lead on Ye Hai Mohabbatein while Vivek features on Kavach... Kaali Shaktiyon Se. Both are among television's top-rated shows.
Preity Zinta and Gene Goodenough
Preity Zinta married Gene Goodenough in a private ceremony in Los Angeles on 29 February, 2016. The couple had been dating for quite some time. The wedding was conducted according to Hindu rituals. After the wedding ceremony, the 42-year-old actress introduced her husband to her Bollywood fraternity at a reception in Mumbai on May 13.
See pictures from Preity and Gene's wedding diaries:

A photo posted by bollywood DreamsWorld (@bollywoodiranian_fans) on Aug 31, 2016 at 9:16pm PDT

So since u all are asking, the only thing new about being married is having to wear a #Choora for a couple of weeks pic.twitter.com/HKMLbe1IF1

Speaking to news agency IANS, the Kal Ho Naa Ho actress, who had decided to quit Bollywood, said, "I am happy and lucky that I am married to somebody who pushed me back into doing a movie." Preity's new film Bhaiyyaji Superhitt is a work-in-progress.
Here's wishing all the lovely couples a very happy Valentine week!