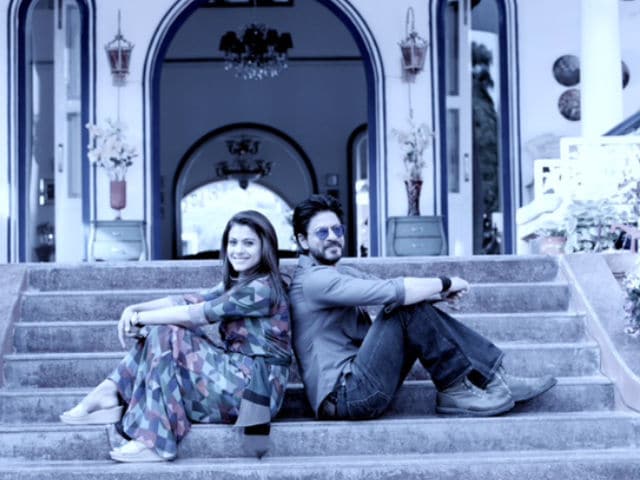 Shah Rukh and Kajol on the sets of Dilwale.

Dilwale will be pitted against Sanjay Leela Bhansali's Bajirao Mastani at the box office as both release the same day (December 18). "Box office-wise I feel both will be affected little bit. I am actually not worried about Dilwale because Shah Rukh Khan is there in the film," said Varun Dhawan

Actor Varun Dhawan, who will be seen in Rohit Shetty's Dilwale with Shah Rukh Khan and Kajol, was awestruck by the chemistry of the Dilwale Dulhania Le Jayenge co-stars. The 28-year-old actor said that the chemistry between them looks real.
Shah Rukh and Kajol are reuniting onscreen after a gap of five years after Karan Johar's 2011 film My Name Is Khan.
"They have this kind of chemistry or aura around them which you feel like when two people are in love or have been in love for so many years. They both are extremely unique and amazing in their own way. They just bring that electricity of chemistry on the sets," Varun said on the sidelines of MAMI Mumbai Film Festival. (Also Read: The Making of Dilwale's 'Mohabbat Bhara' Climax)
Varun, son of filmmaker David Dhawan, said he learnt a lot from superstar Shah Rukh and Rohit.
"Shah Rukh and Rohit Shetty treated me like the baby and made me very comfortable. I learnt so many things especially the way he bleeds in the films. The fake blood that he uses for his scenes is different. He even gifted me a bottle and taught me how to use it to make it look real," Varun said.
Dilwale will be pitted against Sanjay Leela Bhansali's Bajirao Mastani at the box office as both release the same day (December 18) and Varun feels, as a viewer, the clash is "exciting."
"Two big films releasing on same day is very exciting because I have an option which film to watch. But having said that, we have worked really hard on Dilwale, we haven't left any stone unturned," the actor said.
The Main Tera Hero star is not worried about the box office fate of Dilwale as SRK is there in the film.
"Box office-wise I feel both will be affected little bit. But I think as our film's name is Dilwale so we will try to make a place in people's heart. I am actually not worried about Dilwale because Shah Rukh Khan is there in the film," he said.
Varun added Rohit has worked "day and night" for Dilwale.
"Rohit Shetty has worked day and night to make sure to get out the best thing possible. It's a very big film, you can expect everything from this film," he said.
"If I know that the producer doesn't have a budget and if I know that I love the script, I work around things. There is no point making a film with a huge budget if it is not going to make money for the producer," he added.