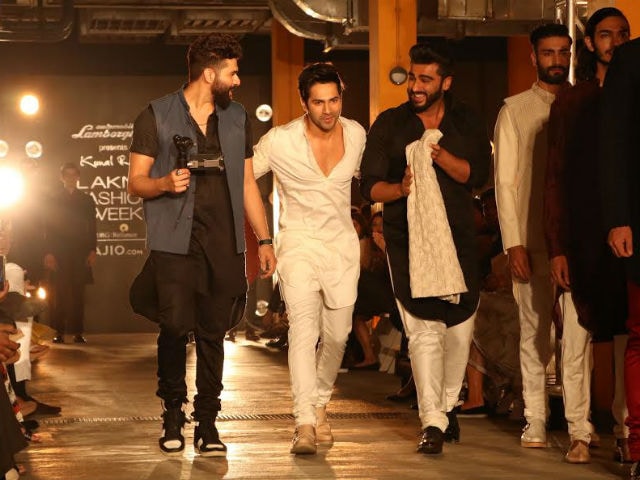 Varun Dhawan at the Lakme Fashion Week in Mumbai

Varun Dhawan, 29 years and seven films old, has his filmy plans perfectly mapped out. At the Lakme Fashion Week in Mumbai, Varun said he will stick to 'commercial' cinema and wants to model his career on that of the Khans. The actor defined commercial films as those "that everyone in the country can watch - people in Bihar can watch it, people in Maharashtra can watch it, people all over the country can watch," news agency PTI reported. A handful of older stars have got it right, he added, telling PTI, "I am just trying to make that attempt which I think the Khans do wonderfully, they make films for the entire country. Also, Akshay Kumar and Hrithik Roshan."
Of his seven films, 2015's Badlapur stands out as the sole offbeat choice. Varun, who debuted in Karan Johar's 2012 movie Student Of The Year, has starred in hits like ABCD 2 and Humpty Sharma Ki Dulhania. He is currently making Badrinath Ki Dulhania, a trailer for which released today, and Judwaa 2, sequel/remake to the original Salman Khan hit. "My attempt is to make a film which everyone can enjoy," Varun Dhawan told PTI.
He fully understands the import of having to fill Salman's shoes. "It is a daunting thing. I am just going to put my head down and go into the film and not talk much of it. Anything I do is going to be less. I am just trying to create two characters which people can love," Varun said. He plays estranged twins in the comedy errors, to be directed by his father David Dhawan who made the original film. Actresses Jacqueline Fernandez and Taapsee Pannu co-star.
Varun will also return to the Badlapur genre of cinema. "100 per cent. In fact, by the end of the year there will be a surprise," he told PTI.
Varun Dhawan was at Lakme Fashion Week walking the ramp for designer Kunal Rawal with colleague Arjun Kapoor.
(With inputs from PTI)