Varun Says, 'John Abraham and I Will Make a Good Pair in Dostana 2'

"If they were still casting for Dostana 2 I think John and I would be a good pair as well. But we have given that moment in Dishoom with that scene so people will have lots to enjoy with it," said Varun Dhawan 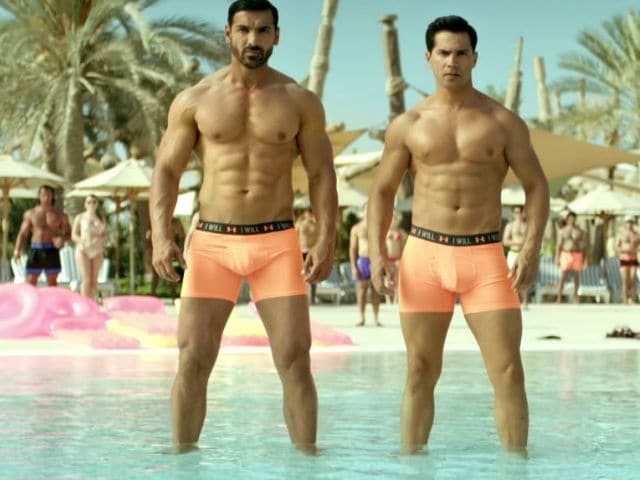 John Abraham and Varun Dhawan in a still from Dishoom.

Varun Dhawan and John Abraham have teamed up for the first time for upcoming buddy-cop thriller Dishoom and the Dilwale actor says he would now love to do Dostana 2 with his co-star.v Dostana featured John and Abhishek Bachchan in lead roles and had a famous scene where the Dhoom star was wearing trunks on the beach.
A similar scene is there in Dishoom with Varun and John in trunks and the Badlapur actor says the duo will look good in Dostana 2.
"If they were still casting for Dostana 2 I think John and I would be a good pair as well. But we have given that moment in Dishoom with that scene so people will have lots to enjoy with it," Varun told PTI when asked whether he would like to feature in the sequel.
Directed by Rohit Dhawan, Dishoom chronicles the story of two cops, Kabir (John) and Junaid, played by Varun, who go on a 36-hour man hunt to find India's top batsman who is missing in the Middle East.
The 29-year-old actor says his chemistry with John in the film reflects how they are in real life, that is, extremely friendly and jovial with each other.
"We are very cool and chilled out. John is a very easy guy. He is way senior to me, much older to me, but he never let me feel like that. I felt very comfortable with him. He never made me feel like he was the senior. We were on back-slapping terms, I could've pushed him, hit him, I had that equation with him so acting became very easy with him," he said.
Varun, who worked in diverse genres of movies in 2015 ranging from Badlapur, ABCD 2 and Dilwale, says he wants Dishoom to work well to keep up the momentum.
"This is my next and only release in 2016 so I want it to be a good year. Plus, having the earlier films working, it puts pressure that this film should work as well. I believe we made a good film with good intentions. It ticks all my boxes," said Varun.
Dishoom releases on July 29.
(Except for the headline, this story has not been edited by NDTV staff and is published from a syndicated feed.)