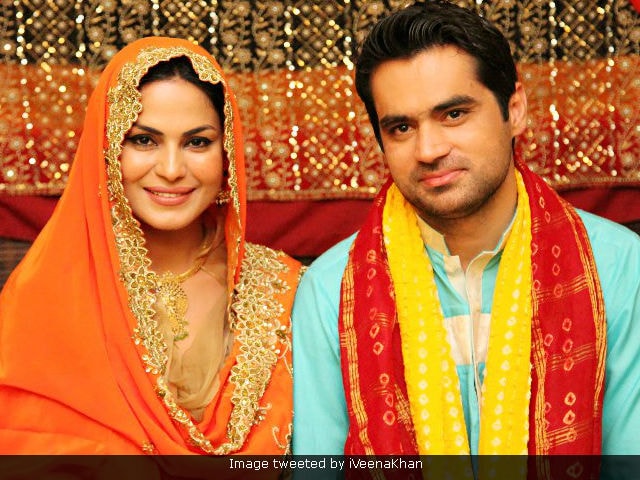 Actress Veena Malik ended her three-year-old marriage and has officially divorced her husband Asad Bashir Khan Khattak, reports news agency PTI. A family court in Lahore granted them divorce recently. The court accepted Veena's 'khula' (divorce) application and ruled in her favour after non-pursuance of the case by Asad Khattak. Veena will also have return 25 per cent of the 'haq mehr' (dower money) to Asad Khattak because she applied for divorce, reports PTI. Veena Malik, 33, filed for divorce in first week of this January citing irreconcilable differences and saying that they could not live together, PTI quoted a court official as saying.
After Asad Khattak failed to answer the court's summons, Veena Malik's divorce plea was accepted. 'The court accepted Veena's plea and issued a decree last month validating divorce between the couple,' a court official told PTI.
Veena Malika and Asad Khattak got married in December 2013 in Dubai and have been living separately for the last three months. They have two children together - Abram (2) and Amal (1). Veena Malik, who has quit the entertainment industry after marriage, reportedly wanted to rejoin the showbiz, but Asad Khattak 'insisting she look after their two children,' reports PTI.
On Twitter, Dubai-based Asad Bashir Khan Khattak describes himself as businessman, singer, actor and humanitarian. Veena Malik is an actress since 2000. She started her career in Pakistan with films like Tere Pyar Mein, Koi Tujh Sa Kahan and Mohabbatan Sachiyan. She featured on television show Bigg Boss in 2010 after which she starred in Bollywood films like Zindagi 50-50 and Super Model, and Kannada film Dirty Picture: Silk Sakkath Maga.
(With PTI inputs)