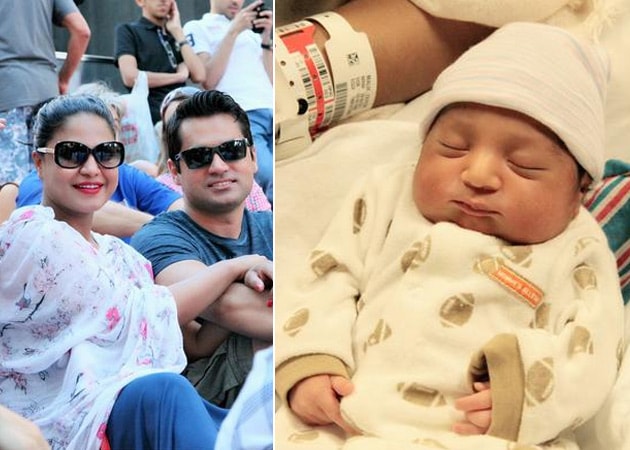 This image was posted on Twitter by Veena Malik Khan

While SRK fashioned his son's name with a capital 'R', Veena left that alteration out

Controversy's favourite child Veena Malik, now Veena Malik Khan, knows how to make it to the headlines. The actress, who married a Dubai based businessman Asad Bashir Khan in December last year, gave birth to a baby boy in Arlington, United States on September 23.

While SRK fashioned his son's name with a capital 'R', Veena left that alteration out. Her justification being - Abram is Abraham/Ibrahim's original name, who is the considered as the pioneer of Islam.

Meanwhile the Zindagi 50:50 actress also borrowed a leaf out of actress Shilpa Shetty's book and activated a twitter handle for her son hours after his birth.

Time to catch some Zzzzzzz... Next to my mom @iVeenaKhan.... Good Night World.... :) pic.twitter.com/zPkP9Ork8J

Surprisingly, the one-day-old baby can already boast of having 248 followers!

Time to catch some Zzzzzzz... Next to my mom @iVeenaKhan.... Good Night World.... :) pic.twitter.com/zPkP9Ork8J

2-year-old Viaan Raj Kundra too has a Twitter handle which is managed by his mother Shilpa and father Raj Kundra.

Well Veena may have opted for the simpler beauties of life, but she sure knows how to be in the limelight.