Vidya Balan: Glad I did not succumb to fashion pressure at Cannes 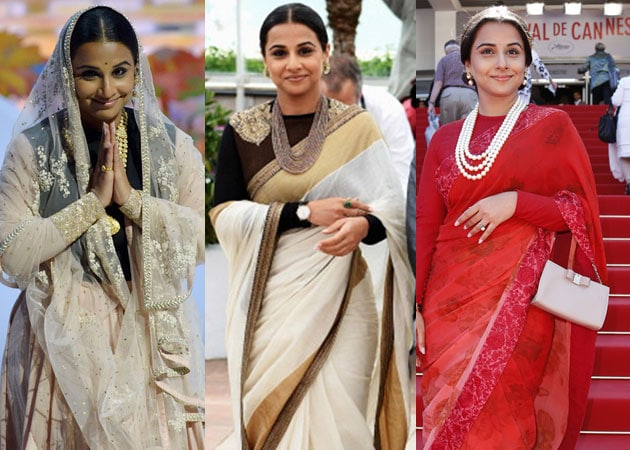 Vidya Balan's traditional Indian clothes at the Cannes Film Festival this year may have received mixed response from fashion critics but the actress says she did not want her choice of clothes to be just sartorial statement but rather reflect her identity.

Vidya Balan's traditional Indian clothes at the Cannes Film Festival this year may have received mixed response from fashion critics but the actress says she did not want her choice of clothes to be just a sartorial statement but rather reflect her identity.
The 35-year-old actress was part of the prestigious nine-member jury, headed by Hollywood director Steven Spielberg at the annual film festival, where glamour is key and every appearance on the red carpet is placed under the harsh scrutiny of global paparazzi.
Be it her Mughal princess look, her bright maroon lehenga or the statement nathni, Vidya did manage to grab eyeballs at the prestigious event.
"I enjoyed what I wore every time I stepped out. I love Indian wear and I thought I would stick to it even if I am at Cannes. I am glad I did not succumb to any pressure related to what I should wear. People actually came up to me and complimented me on what what I was wearing," Vidya told PTI. "They loved it. I received all sorts of wonderful reaction.
They were very curious about all the clothes, accessories and yes the nath. I am happy and proud of myself," she said.
This year, the 66th Cannes festival showcased India as a guest country to mark the centenary of its film industry.
The The Dirty Picture star got to rub shoulders with big international names like Oscar-winning actress Nicole Kidman, Life of Pi helmer Ang Lee, Oscar-winner Christophe Waltz, Japanese director Naomi Kawase, Scottish director Lynne Ramsay, French actor-director Daniel Auteuil and Romanian director Cristian Mungiu, who were all part of the jury.
"It was a fabulous two weeks of my life. I had lost touch with world cinema. I used to watch films every night. I also used to visit film festivals and special screenings but somehow I couldn't find time anymore. But I am so happy to have got the opportunity to attend the Cannes fest as I could again catch up with world cinema," Vidya said.
"Being part of the jury was the cherry on the cake. We were treated like royalty. It was very flattering," she said.
Vidya will be next seen in Rajkumar Gupta directed comedy thriller Ghanchakkar. The film also stars Emraan Hashmi and will hit theatres on June 28.