Vidya Balan: I am ready to do another Dirty Picture 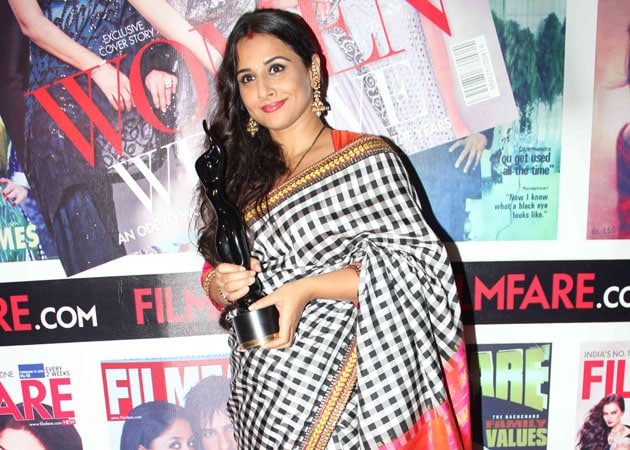 Vidya Balan will next be seen in Ghanchakkar.

Actress Vidya Balan says that marriage neither put the brakes on her prize-winning acting career nor does it have any bearing on the kind of roles she would choose in future.

"I am enjoying being married," says Vidya Balan, adding that marriage neither put the brakes on her prizewinning acting career nor does it have any bearing on the kind of roles she would choose in future.
Work-life balance is possible for the actress because the Parineeta girl has found a supportive husband in Siddharth Roy Kapur, managing director of Studios, Disney UTV, with whom she tied the knot at a private ceremony in December last year.
"I am enjoying being married. The good thing is that at the end of the day you get to see each other," she told IANS in an exclusive interview.
Praising Siddharth, she added: "He is very supportive. In fact, I did The Dirty Picture (2011) after we got together."
The 35-year-old doesn't feel marriage will alter the kind of roles she would take up.
"I don't think marriage really has a bearing on that. Both of us respect what the other does. I may choose a role which I feel very strongly about, and he may decide to produce a film which he feels very strongly about. You just respect each other's profession," she said.
And she is willing to do another Dirty Picture.
"The definition of boldness may not be The Dirty Picture. Even Ghanchakkar is a bold role. I believe that there is an extraordinary in the ordinary and I feel that is what films are exploring these days vis-a-vis different characters."
"Having said that, it could be another Dirty Picture also and if I feel strongly about it, I will go and do it," she said.
Post-marriage Ghanchakkar shooting and promotions have been keeping her busy. And she said that she is "enjoying straddling these two worlds".
"At the same time I don't have unreal expectations from myself. There are times when there will be slip ups..."
Also busy with Shaadi Ke Side Effects, she admits work sometimes does not allow her and her husband to spend enough time with each other.
"The amazing thing is that in the six months that we have been married, we have both been travelling a lot. Despite the fact that we live in the same house, we have ended spending lesser time together."
Having said that, the actress admits a certain amount of responsibility comes after marriage.
"I guess both of us are hard working professionals. Around a release or when I am in the middle of shooting, he understands what my pressures are and I understand what his pressures are."
"But, yes, there is a certain responsibility. I am also running a house. I can no longer leave it to my mother to decide what to cook at home," she said.
Come what may, she won't quit acting.
"I would love to act till I am 83... Thank god, it worked out for me as an actor because I see myself as an actor, primarily. I think there are enough opportunities," said the actress.
Post-Parineeta success, her career took a slump, but she bounced back with films like Paa and No One Killed Jessica before hitting the jackpot with The Dirty Picture and Kahaani. "I have reasons to believe that there will be exciting roles for me at every stage of my life and I am willing to embrace different roles at different stages of my life. I don't see myself taking a break," Vidya said.